Shares of Herc Holdings Inc. (NYSE:HRI – Get Rating) have received a consensus rating of “Moderate Buy” from the eight brokerages that are presently covering the stock, MarketBeat reports. One investment analyst has rated the stock with a hold recommendation and five have assigned a buy recommendation to the company. The average twelve-month price target among brokers that have issued a report on the stock in the last year is $181.50.

Herc (NYSE:HRI – Get Rating) last posted its quarterly earnings results on Thursday, April 21st. The transportation company reported $1.95 EPS for the quarter, missing the consensus estimate of $1.96 by ($0.01). The business had revenue of $567.30 million during the quarter, compared to analyst estimates of $552.77 million. Herc had a return on equity of 27.26% and a net margin of 11.42%. The business’s revenue was up 25.0% on a year-over-year basis. During the same quarter last year, the firm earned $1.10 EPS. On average, analysts expect that Herc will post 12.47 EPS for the current year.

The firm also recently announced a quarterly dividend, which was paid on Friday, June 10th. Stockholders of record on Friday, May 27th were issued a $0.575 dividend. The ex-dividend date of this dividend was Thursday, May 26th. This represents a $2.30 dividend on an annualized basis and a dividend yield of 2.57%. Herc’s payout ratio is 28.05%.

About Herc (Get Rating)

Herc Holdings Inc, together with its subsidiaries, operates as an equipment rental supplier. It rents aerial, earthmoving, material handling, trucks and trailers, air compressors, compaction, and lighting equipment, as well as generators, and safety supplies and expendables; and provides ProSolutions, an industry specific solution based services, such as pumping solutions, power generation, climate control, remediation and restoration, and studio and production equipment. 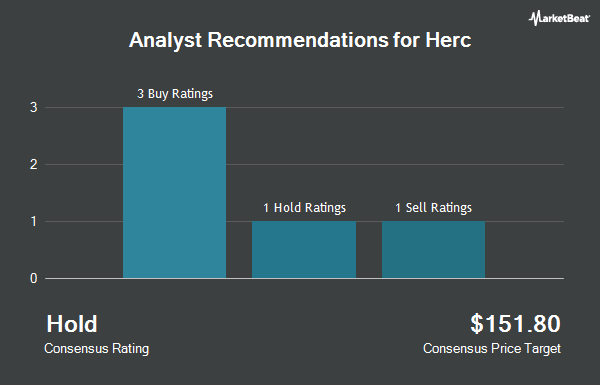 Receive News & Ratings for Herc Daily - Enter your email address below to receive a concise daily summary of the latest news and analysts' ratings for Herc and related companies with MarketBeat.com's FREE daily email newsletter.

Complete the form below to receive the latest headlines and analysts' recommendations for Herc with our free daily email newsletter: