Shares of Iovance Biotherapeutics, Inc. (NASDAQ:IOVA – Get Rating) have earned a consensus recommendation of “Moderate Buy” from the thirteen analysts that are covering the stock, MarketBeat.com reports. One equities research analyst has rated the stock with a sell rating, one has given a hold rating and nine have issued a buy rating on the company. The average 12-month price objective among brokerages that have covered the stock in the last year is $30.64.

Iovance Biotherapeutics (NASDAQ:IOVA – Get Rating) last issued its earnings results on Thursday, May 5th. The biotechnology company reported ($0.58) earnings per share (EPS) for the quarter, topping the consensus estimate of ($0.64) by $0.06. The company had revenue of $12.00 million during the quarter. During the same quarter in the prior year, the company earned ($0.51) EPS. The company’s revenue was up .0% compared to the same quarter last year. On average, analysts predict that Iovance Biotherapeutics will post -2.49 EPS for the current year.

In other news, Director Merrill A. Mcpeak bought 10,000 shares of the stock in a transaction that occurred on Tuesday, May 31st. The shares were bought at an average price of $6.84 per share, for a total transaction of $68,400.00. Following the purchase, the director now owns 20,150 shares in the company, valued at $137,826. The acquisition was disclosed in a document filed with the Securities & Exchange Commission, which is accessible through the SEC website. 7.60% of the stock is currently owned by insiders. 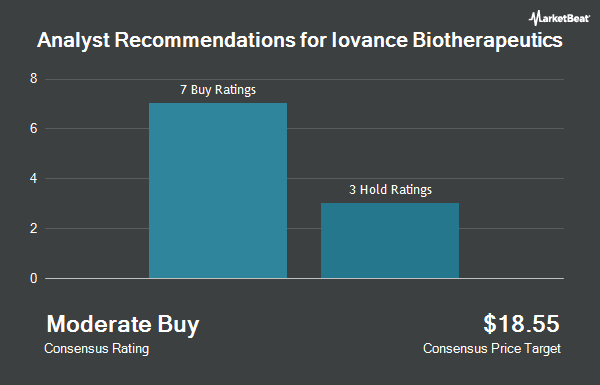