Shares of Under Armour, Inc. (NYSE:UAA – Get Rating) have received an average recommendation of “Hold” from the twenty-nine research firms that are currently covering the company, MarketBeat Ratings reports. Fourteen equities research analysts have rated the stock with a hold rating and eight have issued a buy rating on the company. The average twelve-month price objective among analysts that have issued a report on the stock in the last year is $20.09.

Under Armour (NYSE:UAA – Get Rating) last released its earnings results on Friday, May 6th. The company reported ($0.01) earnings per share (EPS) for the quarter, missing the consensus estimate of $0.04 by ($0.05). Under Armour had a return on equity of 16.20% and a net margin of 3.89%. The company had revenue of $1.30 billion during the quarter, compared to analyst estimates of $1.34 billion. During the same period in the prior year, the business posted $0.16 earnings per share. Under Armour’s revenue was up 3.4% on a year-over-year basis. As a group, analysts forecast that Under Armour will post 0.68 EPS for the current year.

Under Armour announced that its Board of Directors has approved a stock repurchase program on Wednesday, February 23rd that allows the company to buyback $500.00 million in outstanding shares. This buyback authorization allows the company to buy up to 6.1% of its stock through open market purchases. Stock buyback programs are typically a sign that the company’s board believes its shares are undervalued.

In other news, Director David W. Gibbs purchased 25,000 shares of the firm’s stock in a transaction that occurred on Tuesday, May 31st. The shares were acquired at an average price of $9.60 per share, for a total transaction of $240,000.00. Following the completion of the acquisition, the director now directly owns 50,000 shares in the company, valued at $480,000. The transaction was disclosed in a filing with the Securities & Exchange Commission, which is available through the SEC website. 16.40% of the stock is owned by company insiders.

About Under Armour (Get Rating) 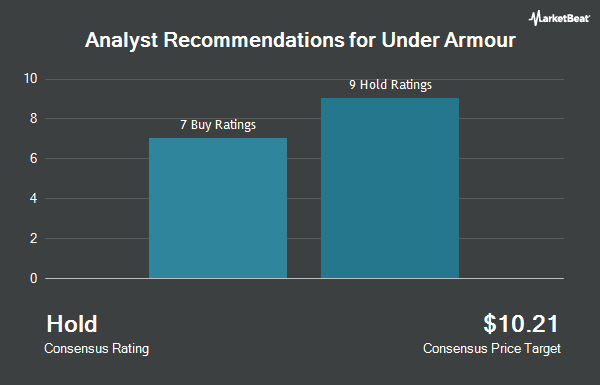