Hilton Worldwide (NYSE:HLT – Get Rating) will be announcing its earnings results before the market opens on Wednesday, July 27th. Analysts expect the company to announce earnings of $1.06 per share for the quarter. Hilton Worldwide has set its Q2 guidance at $0.98 to $1.03 EPS and its FY22 guidance at $3.77 to $4.02 EPS.Investors interested in registering for the company’s conference call can do so using this link.

The company also recently declared a quarterly dividend, which was paid on Friday, June 24th. Stockholders of record on Friday, May 27th were given a dividend of $0.15 per share. This represents a $0.60 annualized dividend and a dividend yield of 0.49%. The ex-dividend date of this dividend was Thursday, May 26th. Hilton Worldwide’s dividend payout ratio (DPR) is presently 23.17%. 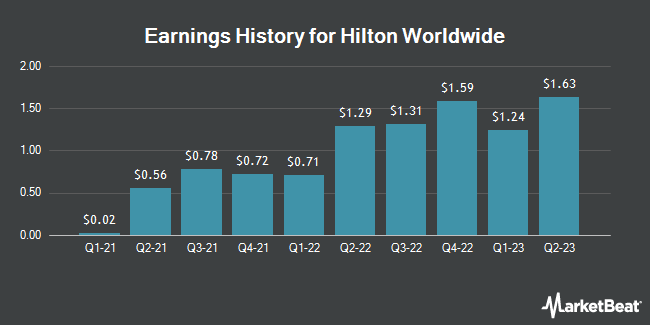 Complete the form below to receive the latest headlines and analysts' recommendations for Hilton Worldwide with our free daily email newsletter: