NRG Energy, Inc. (NYSE:NRG – Get Rating) – Investment analysts at Seaport Res Ptn decreased their FY2024 earnings per share estimates for shares of NRG Energy in a research note issued to investors on Monday, July 18th. Seaport Res Ptn analyst A. Storozynski now anticipates that the utilities provider will earn $5.23 per share for the year, down from their previous estimate of $5.25. The consensus estimate for NRG Energy’s current full-year earnings is $3.31 per share.

Several other brokerages also recently weighed in on NRG. StockNews.com assumed coverage on NRG Energy in a research note on Thursday, March 31st. They set a “hold” rating for the company. Bank of America downgraded NRG Energy from a “neutral” rating to an “underperform” rating and lowered their target price for the company from $43.00 to $42.00 in a research note on Tuesday, June 7th. One analyst has rated the stock with a sell rating, three have issued a hold rating and one has assigned a buy rating to the stock. Based on data from MarketBeat.com, the stock presently has a consensus rating of “Hold” and an average price target of $43.50.

NRG Energy (NYSE:NRG – Get Rating) last announced its earnings results on Friday, May 6th. The utilities provider reported $0.25 earnings per share for the quarter, missing the consensus estimate of $0.55 by ($0.30). The business had revenue of $7.86 billion for the quarter, compared to analyst estimates of $4.46 billion. NRG Energy had a net margin of 14.95% and a return on equity of 45.51%. The firm’s revenue was down 2.9% on a year-over-year basis. During the same quarter in the prior year, the business earned $0.84 earnings per share.

NRG Energy, Inc, together with its subsidiaries, operates as an integrated power company in the United States. It operates through Texas, East, and West. The company is involved in the producing, selling, and delivering electricity and related products and services to approximately 6 million residential, commercial, industrial, and wholesale customers. 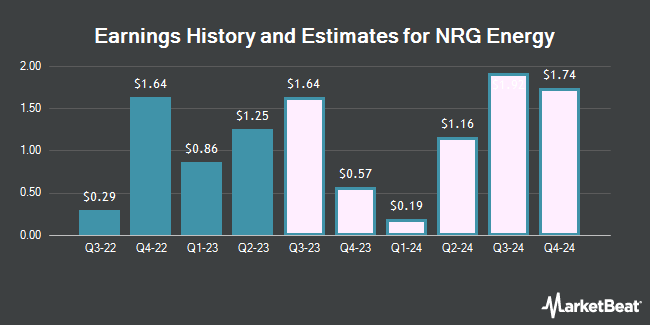 Complete the form below to receive the latest headlines and analysts' recommendations for NRG Energy with our free daily email newsletter: