Separately, Craig Hallum started coverage on shares of 22nd Century Group in a research report on Wednesday, June 15th. They set a “buy” rating and a $5.00 price objective on the stock. Five equities research analysts have rated the stock with a buy rating, According to MarketBeat.com, the stock has an average rating of “Buy” and an average price target of $5.90.

22nd Century Group (NASDAQ:XXII – Get Rating) last issued its earnings results on Thursday, May 5th. The biotechnology company reported ($0.05) EPS for the quarter, topping the consensus estimate of ($0.06) by $0.01. 22nd Century Group had a negative net margin of 109.97% and a negative return on equity of 43.44%. The company had revenue of $9.05 million for the quarter, compared to the consensus estimate of $8.38 million. During the same period in the previous year, the firm earned ($0.03) earnings per share. Equities research analysts anticipate that 22nd Century Group will post -0.2 earnings per share for the current year.

In related news, insider John Franzino sold 20,324 shares of the company’s stock in a transaction dated Tuesday, June 14th. The shares were sold at an average price of $1.69, for a total value of $34,347.56. Following the transaction, the insider now owns 405,574 shares in the company, valued at approximately $685,420.06. The sale was disclosed in a document filed with the SEC, which is accessible through the SEC website. Company insiders own 1.80% of the company’s stock. 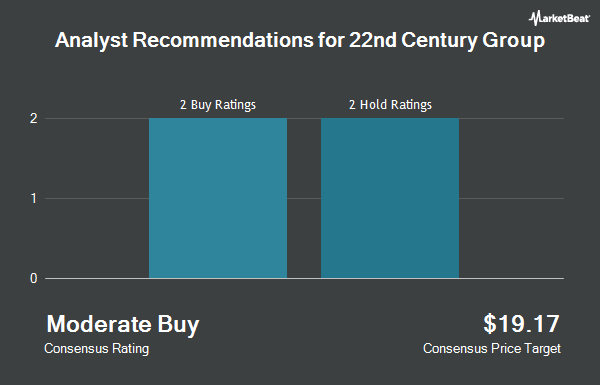