Gol Linhas Aéreas Inteligentes S.A. (NYSE:GOL – Get Rating) has received an average rating of “Hold” from the eight analysts that are presently covering the stock, MarketBeat.com reports. Two equities research analysts have rated the stock with a sell recommendation, two have given a hold recommendation and three have issued a buy recommendation on the company. The average twelve-month price objective among analysts that have updated their coverage on the stock in the last year is $5.76.

Gol Linhas Aéreas Inteligentes (NYSE:GOL – Get Rating) last announced its earnings results on Thursday, April 28th. The transportation company reported ($0.63) EPS for the quarter, beating the consensus estimate of ($0.67) by $0.04. The company had revenue of $616.19 million during the quarter, compared to the consensus estimate of $603.20 million. As a group, research analysts expect that Gol Linhas Aéreas Inteligentes will post -1.17 earnings per share for the current year. 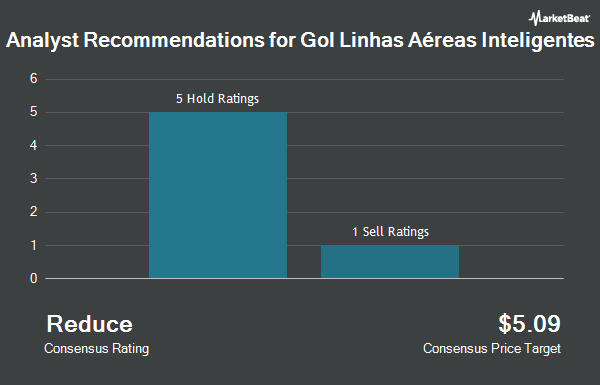 Complete the form below to receive the latest headlines and analysts' recommendations for Gol Linhas Aéreas Inteligentes with our free daily email newsletter: