UBS Group began coverage on shares of Repligen (NASDAQ:RGEN – Get Rating) in a report released on Wednesday morning, MarketBeat.com reports. The brokerage issued a buy rating and a $213.00 price objective on the biotechnology company’s stock.

Several other brokerages have also weighed in on RGEN. Craig Hallum cut their price target on Repligen from $286.00 to $274.00 in a research note on Thursday, April 28th. StockNews.com started coverage on Repligen in a research report on Thursday, March 31st. They issued a hold rating for the company. One investment analyst has rated the stock with a hold rating and seven have issued a buy rating to the stock. Based on data from MarketBeat, the stock currently has an average rating of Moderate Buy and a consensus price target of $288.86.

Repligen (NASDAQ:RGEN – Get Rating) last posted its earnings results on Wednesday, April 27th. The biotechnology company reported $0.92 earnings per share for the quarter, beating the consensus estimate of $0.72 by $0.20. The firm had revenue of $206.40 million during the quarter, compared to analyst estimates of $185.48 million. Repligen had a net margin of 19.86% and a return on equity of 11.13%. The business’s quarterly revenue was up 44.5% on a year-over-year basis. During the same period in the previous year, the firm earned $0.68 EPS. On average, research analysts predict that Repligen will post 3.1 earnings per share for the current fiscal year.

Hedge funds and other institutional investors have recently made changes to their positions in the company. HM Payson & Co. purchased a new position in Repligen in the fourth quarter worth approximately $26,000. Harding Loevner LP increased its position in shares of Repligen by 121.3% during the 1st quarter. Harding Loevner LP now owns 177 shares of the biotechnology company’s stock worth $26,000 after purchasing an additional 97 shares during the last quarter. Confluence Wealth Services Inc. purchased a new stake in Repligen in the 4th quarter valued at about $27,000. Cambridge Trust Co. acquired a new position in Repligen in the first quarter valued at about $38,000. Finally, Sageworth Trust Co of South Dakota purchased a new position in Repligen during the fourth quarter worth about $46,000. Institutional investors and hedge funds own 86.82% of the company’s stock. 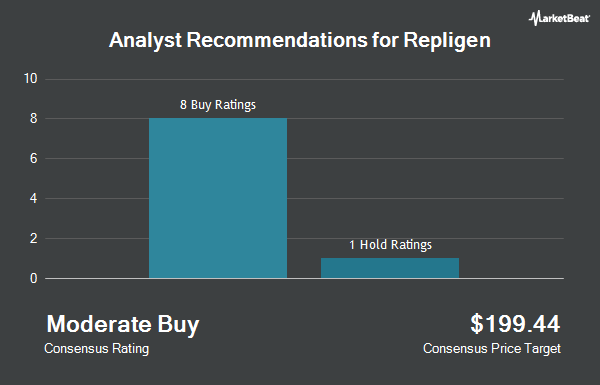