Otter Tail (NASDAQ:OTTR – Get Rating) will announce its earnings results after the market closes on Monday, August 1st. Analysts expect the company to announce earnings of $1.27 per share for the quarter. Otter Tail has set its FY22 guidance at $5.15-5.45 EPS.Individual that wish to listen to the company’s earnings conference call can do so using this link.

Otter Tail (NASDAQ:OTTR – Get Rating) last released its quarterly earnings data on Monday, May 2nd. The utilities provider reported $1.72 EPS for the quarter, topping the consensus estimate of $1.16 by $0.56. The company had revenue of $374.90 million during the quarter, compared to the consensus estimate of $334.90 million. Otter Tail had a return on equity of 22.37% and a net margin of 16.67%. During the same period last year, the company earned $0.73 EPS. On average, analysts expect Otter Tail to post $5 EPS for the current fiscal year and $4 EPS for the next fiscal year.

The firm also recently declared a quarterly dividend, which was paid on Friday, June 10th. Investors of record on Friday, May 13th were issued a $0.412 dividend. The ex-dividend date of this dividend was Thursday, May 12th. This represents a $1.65 dividend on an annualized basis and a yield of 2.50%. Otter Tail’s dividend payout ratio is presently 31.61%.

Separately, StockNews.com raised Otter Tail from a “hold” rating to a “buy” rating in a report on Wednesday, May 11th. 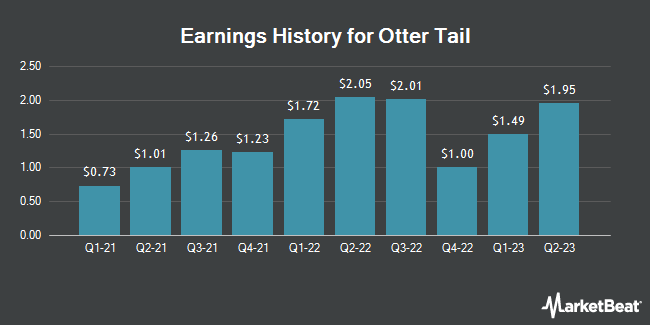