Mercury Systems (NASDAQ:MRCY – Get Rating) is scheduled to issue its quarterly earnings data after the market closes on Tuesday, August 2nd. Analysts expect the company to announce earnings of $0.85 per share for the quarter. Mercury Systems has set its Q4 guidance at $0.96-1.06 EPS.Parties interested in participating in the company’s conference call can do so using this link.

Mercury Systems (NASDAQ:MRCY – Get Rating) last posted its earnings results on Tuesday, May 3rd. The technology company reported $0.45 earnings per share (EPS) for the quarter, meeting analysts’ consensus estimates of $0.45. The firm had revenue of $233.75 million during the quarter, compared to analysts’ expectations of $249.34 million. Mercury Systems had a net margin of 1.29% and a return on equity of 6.12%. The company’s revenue was down 9.0% compared to the same quarter last year. During the same period in the previous year, the company earned $0.53 earnings per share. On average, analysts expect Mercury Systems to post $2 EPS for the current fiscal year and $2 EPS for the next fiscal year.

Mercury Systems, Inc, a technology company, engages in the manufacture and sale of components, products, modules, and subsystems for aerospace and defense industries in the United States, Europe, and the Asia Pacific. The company's products and solutions are deployed in approximately 300 programs with 25 defense contractors and commercial aviation customers. 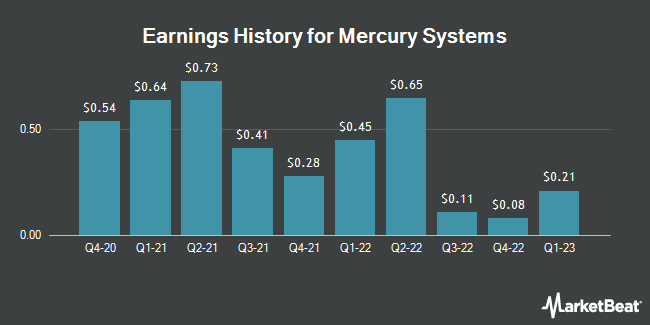