Fathom (NASDAQ:FTHM – Get Rating) will be issuing its quarterly earnings data after the market closes on Thursday, August 4th. Analysts expect the company to announce earnings of ($0.27) per share for the quarter. Parties that are interested in participating in the company’s conference call can do so using this link.

Fathom (NASDAQ:FTHM – Get Rating) last released its quarterly earnings data on Wednesday, May 4th. The company reported ($0.37) EPS for the quarter, beating analysts’ consensus estimates of ($0.40) by $0.03. Fathom had a negative return on equity of 22.96% and a negative net margin of 4.07%. The business had revenue of $90.08 million during the quarter, compared to the consensus estimate of $77.55 million. During the same quarter in the prior year, the company posted ($0.25) earnings per share. On average, analysts expect Fathom to post $-1 EPS for the current fiscal year and $-1 EPS for the next fiscal year.

In other news, CFO Marco Fregenal acquired 20,000 shares of the firm’s stock in a transaction that occurred on Monday, June 13th. The stock was acquired at an average cost of $9.12 per share, for a total transaction of $182,400.00. Following the completion of the acquisition, the chief financial officer now owns 1,166,080 shares in the company, valued at $10,634,649.60. The transaction was disclosed in a filing with the Securities & Exchange Commission, which is available at this hyperlink. Corporate insiders own 57.39% of the company’s stock.

Separately, Stephens started coverage on Fathom in a report on Monday, July 18th. They issued an “overweight” rating and a $14.00 price target for the company. 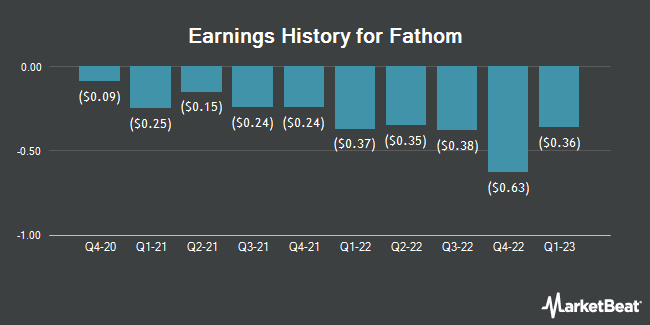 Receive News & Ratings for Fathom Daily - Enter your email address below to receive a concise daily summary of the latest news and analysts' ratings for Fathom and related companies with MarketBeat.com's FREE daily email newsletter.

Complete the form below to receive the latest headlines and analysts' recommendations for Fathom with our free daily email newsletter: