Logitech International (NASDAQ:LOGI – Get Rating) was downgraded by analysts at Loop Capital from a “buy” rating to a “hold” rating in a report issued on Wednesday, MarketBeat Ratings reports. They presently have a $55.00 price target on the technology company’s stock, down from their previous price target of $110.00. Loop Capital’s price objective would indicate a potential downside of 0.70% from the stock’s previous close.

In other news, Director Patrick Aebischer sold 10,000 shares of the stock in a transaction on Wednesday, June 1st. The stock was sold at an average price of $61.36, for a total transaction of $613,600.00. Following the completion of the sale, the director now owns 12,511 shares in the company, valued at approximately $767,674.96. The sale was disclosed in a legal filing with the Securities & Exchange Commission, which is available through this hyperlink. 0.60% of the stock is currently owned by insiders.

Logitech International SA, through its subsidiaries, designs, manufactures, and markets products that connect people to digital and cloud experiences worldwide. The company offers pointing devices, such as wireless mouse; corded and cordless keyboards, living room keyboards, and keyboard-and-mouse combinations; PC webcams; and keyboards for tablets and smartphones, as well as other accessories for mobile devices. 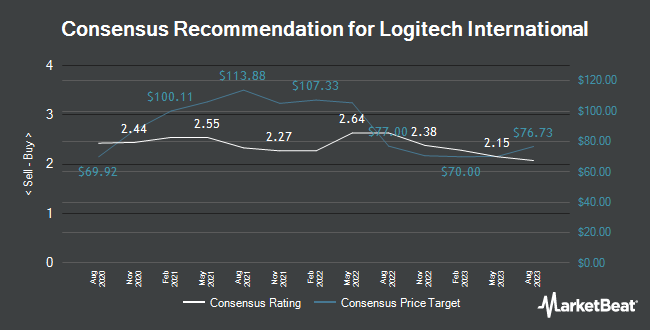