Shares of Umicore SA (OTCMKTS:UMICY – Get Rating) have been given a consensus recommendation of “Hold” by the ten analysts that are currently covering the firm, Marketbeat.com reports. Two research analysts have rated the stock with a sell recommendation, six have given a hold recommendation and one has issued a buy recommendation on the company. The average 1-year target price among brokerages that have issued ratings on the stock in the last year is $36.50.

Umicore SA operates as a materials technology and recycling company worldwide. The company operates through Catalysis, Energy & Surface Technologies, and Recycling segments. The Catalysis segment produces automotive catalysts for gasoline, and diesel light and heavy-duty diesel applications; stationary catalysis for industrial emissions control; and precious metals-based compounds and catalysts for use in the pharmaceutical and fine chemicals industries, as well as fuel cell applications. 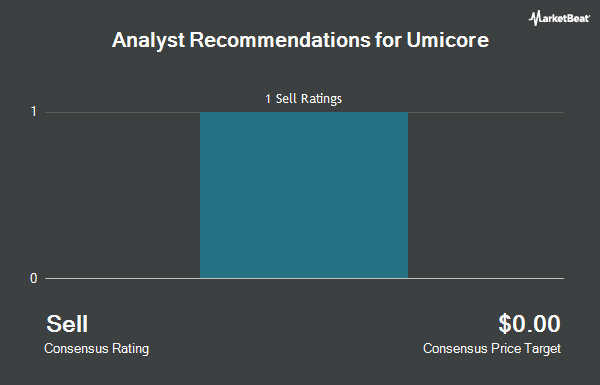 Receive News & Ratings for Umicore Daily - Enter your email address below to receive a concise daily summary of the latest news and analysts' ratings for Umicore and related companies with MarketBeat.com's FREE daily email newsletter.

Complete the form below to receive the latest headlines and analysts' recommendations for Umicore with our free daily email newsletter: