Portland General Electric (NYSE:POR – Get Rating) last announced its quarterly earnings results on Thursday, July 28th. The utilities provider reported $0.72 earnings per share for the quarter, topping analysts’ consensus estimates of $0.40 by $0.32. Portland General Electric had a return on equity of 8.87% and a net margin of 9.73%. The company had revenue of $591.00 million during the quarter, compared to analysts’ expectations of $531.67 million. During the same quarter in the previous year, the firm earned $0.36 earnings per share. The business’s quarterly revenue was up 10.1% compared to the same quarter last year.

In other news, Director Dawn L. Farrell purchased 4,000 shares of the stock in a transaction that occurred on Thursday, May 26th. The shares were purchased at an average cost of $48.52 per share, for a total transaction of $194,080.00. Following the completion of the purchase, the director now directly owns 9,223 shares of the company’s stock, valued at approximately $447,499.96. The transaction was disclosed in a filing with the SEC, which can be accessed through this link. Corporate insiders own 0.52% of the company’s stock. 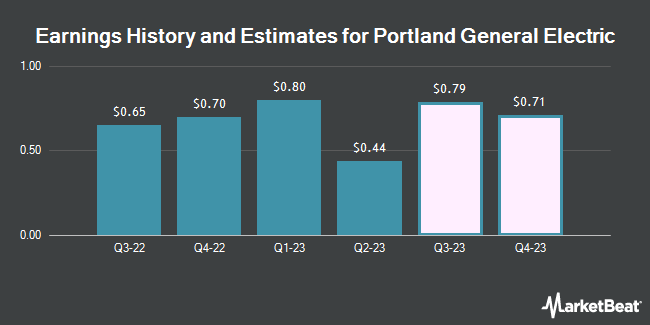 Complete the form below to receive the latest headlines and analysts' recommendations for Portland General Electric with our free daily email newsletter: