Victory Capital Management Inc. lessened its stake in Alexander & Baldwin, Inc. (NYSE:ALEX – Get Rating) by 0.7% in the first quarter, according to the company in its most recent disclosure with the Securities & Exchange Commission. The institutional investor owned 793,022 shares of the financial services provider’s stock after selling 5,283 shares during the quarter. Victory Capital Management Inc. owned about 1.09% of Alexander & Baldwin worth $18,358,000 at the end of the most recent reporting period.

Separately, Piper Sandler decreased their target price on Alexander & Baldwin to $22.00 in a research report on Monday, July 4th.

The company also recently declared a quarterly dividend, which will be paid on Wednesday, October 5th. Stockholders of record on Monday, September 19th will be issued a dividend of $0.22 per share. This is a boost from Alexander & Baldwin’s previous quarterly dividend of $0.20. This represents a $0.88 annualized dividend and a dividend yield of 4.63%. The ex-dividend date is Friday, September 16th. Alexander & Baldwin’s payout ratio is 222.23%.

Want to see what other hedge funds are holding ALEX? Visit HoldingsChannel.com to get the latest 13F filings and insider trades for Alexander & Baldwin, Inc. (NYSE:ALEX – Get Rating). 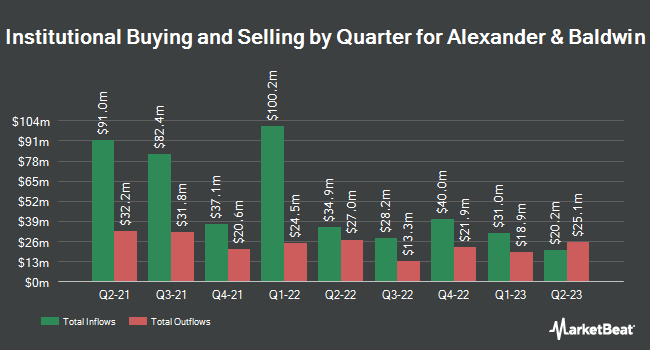 Complete the form below to receive the latest headlines and analysts' recommendations for Alexander & Baldwin with our free daily email newsletter: