State of Tennessee Treasury Department lifted its holdings in shares of Marten Transport, Ltd. (NASDAQ:MRTN – Get Rating) by 17.9% during the 1st quarter, Holdings Channel.com reports. The fund owned 22,293 shares of the transportation company’s stock after buying an additional 3,378 shares during the period. State of Tennessee Treasury Department’s holdings in Marten Transport were worth $396,000 as of its most recent SEC filing.

A number of research analysts recently issued reports on the company. Stephens raised their price target on Marten Transport to $23.00 in a research note on Friday, July 22nd. Vertical Research downgraded Marten Transport from a “buy” rating to a “hold” rating and raised their price target for the stock from $24.00 to $25.00 in a research note on Wednesday, August 17th.

In other news, Director Larry B. Hagness sold 10,313 shares of the firm’s stock in a transaction that occurred on Monday, August 15th. The stock was sold at an average price of $22.93, for a total value of $236,477.09. Following the completion of the sale, the director now directly owns 195,475 shares of the company’s stock, valued at approximately $4,482,241.75. The transaction was disclosed in a legal filing with the Securities & Exchange Commission, which can be accessed through this link. Insiders own 22.50% of the company’s stock.

Marten Transport (NASDAQ:MRTN – Get Rating) last announced its earnings results on Monday, July 18th. The transportation company reported $0.39 earnings per share for the quarter, beating the consensus estimate of $0.32 by $0.07. Marten Transport had a return on equity of 16.24% and a net margin of 9.27%. The company had revenue of $329.57 million for the quarter, compared to the consensus estimate of $291.70 million. During the same period last year, the business posted $0.26 EPS. The company’s revenue was up 41.8% on a year-over-year basis. As a group, equities analysts predict that Marten Transport, Ltd. will post 1.41 earnings per share for the current fiscal year.

Marten Transport, Ltd. operates as a temperature-sensitive truckload carrier for shippers in the United States, Canada, and Mexico. It operates through four segments: Truckload, Dedicated, Intermodal, and Brokerage. The Truckload segment transports food and other consumer packaged goods that require a temperature-controlled or insulated environment.

Want to see what other hedge funds are holding MRTN? Visit HoldingsChannel.com to get the latest 13F filings and insider trades for Marten Transport, Ltd. (NASDAQ:MRTN – Get Rating). 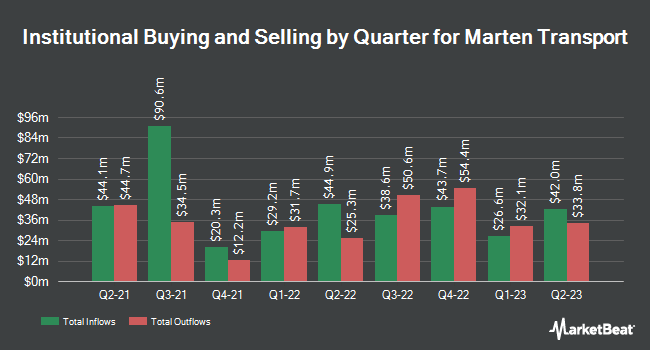 Aurora Cannabis Inc. Given Consensus Rating of “Hold” by Brokerages

Rightmove plc Given Consensus Recommendation of “Hold” by Brokerages

Complete the form below to receive the latest headlines and analysts' recommendations for Marten Transport with our free daily email newsletter: