Citigroup Inc. boosted its stake in shares of Kosmos Energy Ltd. (NYSE:KOS – Get Rating) by 21.3% during the 1st quarter, according to its most recent 13F filing with the SEC. The firm owned 717,470 shares of the oil and gas producer’s stock after buying an additional 126,013 shares during the period. Citigroup Inc. owned approximately 0.16% of Kosmos Energy worth $5,159,000 as of its most recent filing with the SEC.

Kosmos Energy (NYSE:KOS – Get Rating) last released its earnings results on Sunday, August 7th. The oil and gas producer reported $0.28 earnings per share for the quarter, beating the consensus estimate of $0.19 by $0.09. Kosmos Energy had a net margin of 9.19% and a return on equity of 58.18%. During the same period in the previous year, the firm earned ($0.03) earnings per share. On average, research analysts expect that Kosmos Energy Ltd. will post 1.1 EPS for the current fiscal year.

In related news, Director Roy A. Franklin sold 20,732 shares of the firm’s stock in a transaction on Monday, June 13th. The shares were sold at an average price of $7.10, for a total value of $147,197.20. Following the completion of the transaction, the director now directly owns 52,009 shares of the company’s stock, valued at $369,263.90. The transaction was disclosed in a document filed with the Securities & Exchange Commission, which is available through this link. 1.67% of the stock is owned by company insiders.

A number of research firms have recently issued reports on KOS. StockNews.com upgraded shares of Kosmos Energy from a “sell” rating to a “hold” rating in a report on Thursday, May 12th. Berenberg Bank upgraded shares of Kosmos Energy from a “hold” rating to a “buy” rating and lifted their price objective for the company from $8.30 to $8.50 in a report on Thursday, August 25th. Finally, Barclays lifted their price objective on shares of Kosmos Energy from $10.40 to $11.60 and gave the company an “overweight” rating in a report on Wednesday, August 24th. One research analyst has rated the stock with a hold rating and three have given a buy rating to the stock. According to MarketBeat, the company presently has a consensus rating of “Moderate Buy” and an average target price of $9.87.

Want to see what other hedge funds are holding KOS? Visit HoldingsChannel.com to get the latest 13F filings and insider trades for Kosmos Energy Ltd. (NYSE:KOS – Get Rating). 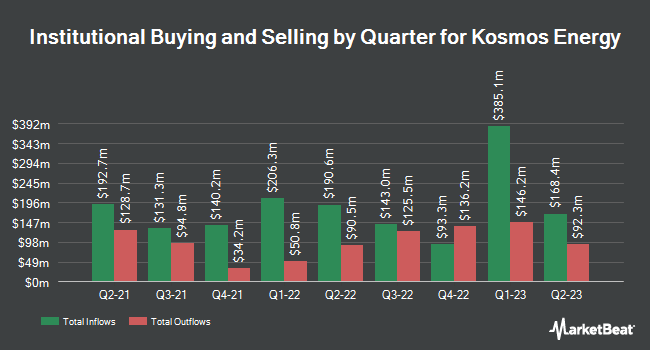