Dave & Buster’s Entertainment (NASDAQ:PLAY – Get Rating) had its price objective upped by Truist Financial from $57.00 to $62.00 in a report issued on Thursday, The Fly reports. They currently have a buy rating on the restaurant operator’s stock.

Dave & Buster’s Entertainment (NASDAQ:PLAY – Get Rating) last issued its quarterly earnings data on Wednesday, September 7th. The restaurant operator reported $0.59 EPS for the quarter, missing the consensus estimate of $1.07 by ($0.48). The firm had revenue of $468.40 million for the quarter, compared to the consensus estimate of $432.92 million. Dave & Buster’s Entertainment had a net margin of 10.47% and a return on equity of 56.54%. The business’s revenue was up 24.0% on a year-over-year basis. During the same period last year, the company posted $1.07 earnings per share. As a group, equities analysts anticipate that Dave & Buster’s Entertainment will post 3.38 EPS for the current year.

In other Dave & Buster’s Entertainment news, CEO Christopher Daniel Morris acquired 33,400 shares of the business’s stock in a transaction on Wednesday, July 13th. The shares were acquired at an average price of $30.54 per share, for a total transaction of $1,020,036.00. Following the completion of the acquisition, the chief executive officer now owns 48,206 shares in the company, valued at $1,472,211.24. The acquisition was disclosed in a legal filing with the SEC, which is available through the SEC website. Corporate insiders own 3.21% of the company’s stock. 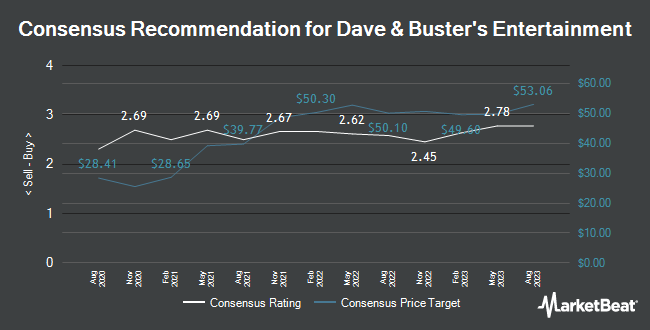