The Middleby Co. (NASDAQ:MIDD – Get Rating) Director Chapin Sarah Palisi sold 225 shares of the firm’s stock in a transaction dated Friday, September 9th. The stock was sold at an average price of $148.00, for a total value of $33,300.00. Following the completion of the transaction, the director now directly owns 7,235 shares in the company, valued at $1,070,780. The sale was disclosed in a document filed with the Securities & Exchange Commission, which is accessible through this hyperlink.

Middleby (NASDAQ:MIDD – Get Rating) last posted its quarterly earnings results on Thursday, August 4th. The industrial products company reported $2.23 EPS for the quarter, topping analysts’ consensus estimates of $2.16 by $0.07. The company had revenue of $1.01 billion for the quarter, compared to analysts’ expectations of $995.84 million. Middleby had a return on equity of 19.11% and a net margin of 12.94%. The firm’s revenue was up 25.3% compared to the same quarter last year. During the same period in the previous year, the firm earned $2.11 EPS. As a group, analysts expect that The Middleby Co. will post 9.52 earnings per share for the current fiscal year.

Hedge Funds Weigh In On Middleby 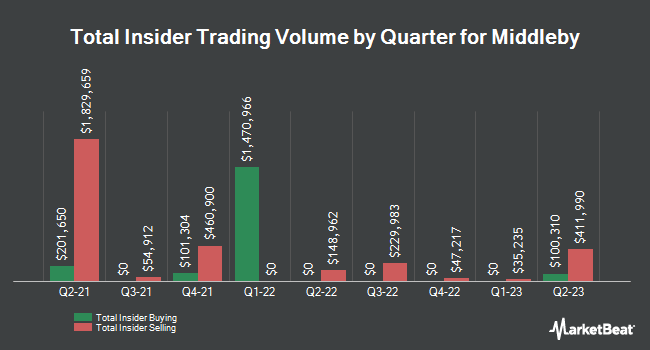