JOANN Inc. (NASDAQ:JOAN – Get Rating) Director Equity Investors Cf L.P Green sold 7,812 shares of the business’s stock in a transaction dated Thursday, September 8th. The stock was sold at an average price of $8.43, for a total transaction of $65,855.16. Following the completion of the sale, the director now owns 59,280 shares in the company, valued at $499,730.40. The transaction was disclosed in a legal filing with the SEC, which can be accessed through this hyperlink.

JOANN (NASDAQ:JOAN – Get Rating) last released its quarterly earnings data on Thursday, September 1st. The company reported ($0.75) earnings per share (EPS) for the quarter, missing the consensus estimate of ($0.55) by ($0.20). The company had revenue of $463.30 million during the quarter, compared to analysts’ expectations of $449.87 million. JOANN had a negative net margin of 2.41% and a positive return on equity of 32.67%. JOANN’s quarterly revenue was down 6.8% on a year-over-year basis. During the same period last year, the firm earned ($0.20) earnings per share. On average, research analysts forecast that JOANN Inc. will post 0.05 earnings per share for the current year.

Institutional Investors Weigh In On JOANN 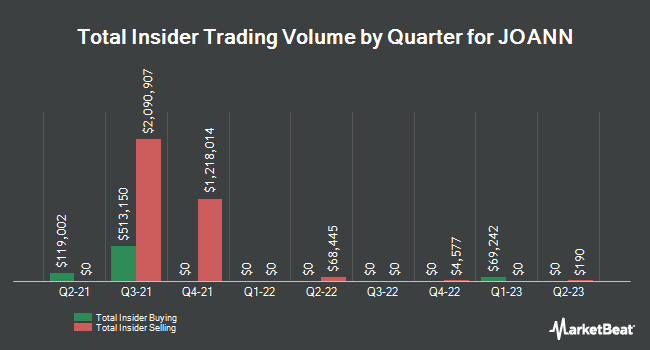 Receive News & Ratings for JOANN Daily - Enter your email address below to receive a concise daily summary of the latest news and analysts' ratings for JOANN and related companies with MarketBeat.com's FREE daily email newsletter.

Reviewing MyMD Pharmaceuticals and Its Competitors

Complete the form below to receive the latest headlines and analysts' recommendations for JOANN with our free daily email newsletter: