Chicago Partners Investment Group LLC raised its position in shares of Saratoga Investment Corp. (NYSE:SAR – Get Rating) by 9.5% in the first quarter, according to the company in its most recent filing with the Securities & Exchange Commission. The firm owned 23,100 shares of the financial services provider’s stock after purchasing an additional 2,010 shares during the quarter. Chicago Partners Investment Group LLC owned 0.19% of Saratoga Investment worth $605,000 as of its most recent SEC filing.

Saratoga Investment (NYSE:SAR – Get Rating) last issued its quarterly earnings data on Wednesday, July 6th. The financial services provider reported $0.53 earnings per share for the quarter, missing analysts’ consensus estimates of $0.55 by ($0.02). Saratoga Investment had a net margin of 31.95% and a return on equity of 7.56%. The firm had revenue of $18.68 million for the quarter, compared to analysts’ expectations of $18.79 million. As a group, sell-side analysts forecast that Saratoga Investment Corp. will post 2.26 earnings per share for the current fiscal year.

In other Saratoga Investment news, Director Steven M. Looney acquired 1,250 shares of the stock in a transaction on Tuesday, August 2nd. The stock was acquired at an average price of $23.54 per share, for a total transaction of $29,425.00. Following the completion of the transaction, the director now directly owns 3,758 shares of the company’s stock, valued at $88,463.32. The purchase was disclosed in a filing with the Securities & Exchange Commission, which is available through this hyperlink. 14.00% of the stock is currently owned by company insiders. 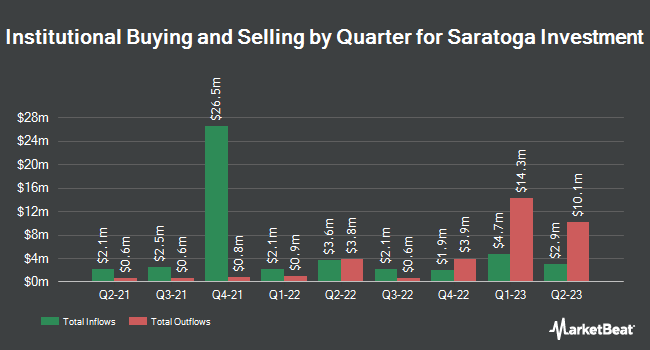 Complete the form below to receive the latest headlines and analysts' recommendations for Saratoga Investment with our free daily email newsletter: