Needham & Company LLC started coverage on shares of Lucid Group (NASDAQ:LCID – Get Rating) in a research report released on Wednesday, The Fly reports. The firm issued an underperform rating on the stock.

Several other research firms also recently weighed in on LCID. Citigroup dropped their target price on Lucid Group from $36.00 to $28.00 in a research report on Thursday, August 4th. R. F. Lafferty assumed coverage on Lucid Group in a research report on Monday. They issued a buy rating and a $19.00 target price for the company. Two research analysts have rated the stock with a sell rating, two have assigned a hold rating and six have issued a buy rating to the stock. Based on data from MarketBeat.com, the company currently has a consensus rating of Hold and an average price target of 30.86.

Lucid Group (NASDAQ:LCID – Get Rating) last released its earnings results on Wednesday, August 3rd. The company reported -0.33 earnings per share for the quarter, beating the consensus estimate of -0.44 by 0.11. The company had revenue of 97.34 million during the quarter. Lucid Group had a negative return on equity of 34.45% and a negative net margin of 1,030.53%. On average, sell-side analysts forecast that Lucid Group will post -1.08 earnings per share for the current year. 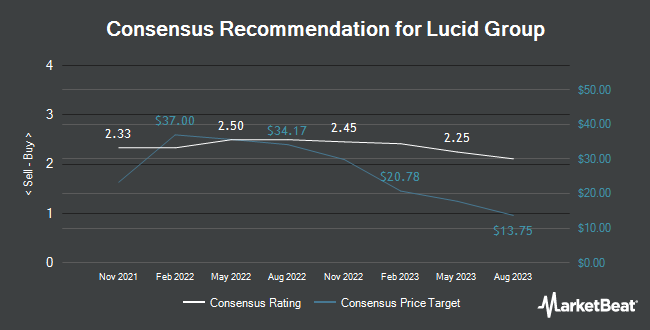