Resources Management Corp CT ADV decreased its position in Marsh & McLennan Companies, Inc. (NYSE:MMC – Get Rating) by 5.7% during the first quarter, according to its most recent disclosure with the Securities and Exchange Commission. The firm owned 1,660 shares of the financial services provider’s stock after selling 100 shares during the quarter. Resources Management Corp CT ADV’s holdings in Marsh & McLennan Companies were worth $283,000 at the end of the most recent quarter.

The firm also recently announced a quarterly dividend, which was paid on Monday, August 15th. Shareholders of record on Thursday, July 28th were issued a dividend of $0.59 per share. This is a boost from Marsh & McLennan Companies’s previous quarterly dividend of $0.54. This represents a $2.36 dividend on an annualized basis and a yield of 1.49%. The ex-dividend date was Wednesday, July 27th. Marsh & McLennan Companies’s dividend payout ratio is currently 35.60%.

Marsh & McLennan Companies, Inc, a professional services company, provides advice and solutions to clients in the areas of risk, strategy, and people worldwide. It operates in two segments, Risk and Insurance Services, and Consulting. The Risk and Insurance Services segment offers risk management services, such as risk advice, risk transfer, and risk control and mitigation solutions, as well as insurance and reinsurance broking, catastrophe and financial modeling, and related advisory services; and insurance program management services. 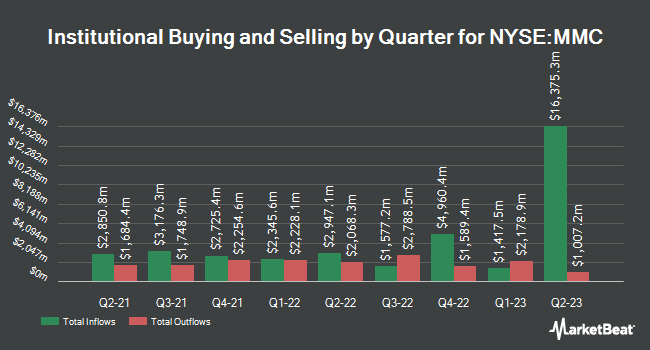 Complete the form below to receive the latest headlines and analysts' recommendations for Marsh & McLennan Companies with our free daily email newsletter: