Shares of Salvatore Ferragamo S.p.A. (OTCMKTS:SFRGY – Get Rating) have received an average rating of “Reduce” from the eight research firms that are covering the firm, Marketbeat.com reports. Four research analysts have rated the stock with a sell recommendation and two have assigned a hold recommendation to the company. The average 1-year target price among brokerages that have issued ratings on the stock in the last year is $15.20.

Salvatore Ferragamo S.p.A., through its subsidiaries, creates, produces, and sells luxury goods for men and women in Italy, rest of Europe, North America, Japan, the Asia Pacific, and Central and South America. The company offers men's and women's footwear; leather goods, such as handbags, suitcases, belts, wallets, and other men's and women's leather accessories; and knitwear, clothes for formal occasions, sportswear, and leisure wear, as well as outerwear, such as husky jackets, ponchos, and leather garments. 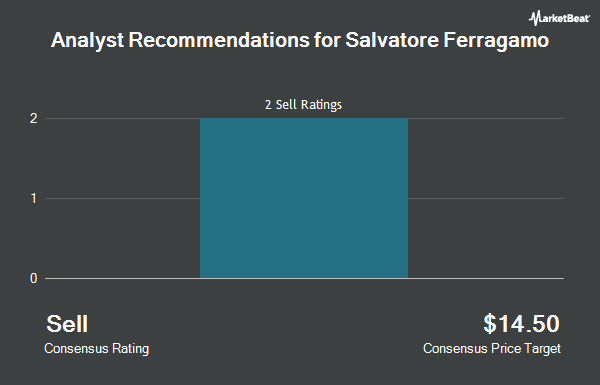 Complete the form below to receive the latest headlines and analysts' recommendations for Salvatore Ferragamo with our free daily email newsletter: