BRP (NASDAQ:DOOO – Get Rating) had its price objective increased by Raymond James from C$135.00 to C$138.00 in a research report report published on Thursday, The Fly reports.

BRP (NASDAQ:DOOO – Get Rating) last issued its earnings results on Wednesday, September 14th. The company reported $2.94 EPS for the quarter, beating analysts’ consensus estimates of $2.03 by $0.91. The business had revenue of $2.44 billion during the quarter, compared to analyst estimates of $2.30 billion. BRP had a negative return on equity of 305.74% and a net margin of 8.79%. The firm’s revenue was up 28.1% compared to the same quarter last year. During the same period in the previous year, the company posted $2.35 EPS. On average, research analysts forecast that BRP will post 8.82 EPS for the current fiscal year.

The firm also recently declared a quarterly dividend, which will be paid on Friday, October 14th. Investors of record on Friday, September 30th will be given a dividend of $0.122 per share. This represents a $0.49 dividend on an annualized basis and a dividend yield of 0.69%. The ex-dividend date is Thursday, September 29th. BRP’s payout ratio is 8.04%.

BRP Inc, together with its subsidiaries, designs, develops, manufactures, distributes, and markets powersports vehicles and marine products in the United States, Canada, Europe, the Asia Pacific, Mexico, Austria, and internationally. The company operates through two segments, Powersports and Marine. It offers all-terrain, side-by-side, and three-wheeled vehicles; seasonal products, such as snowmobiles and personal watercraft; and engines for jet boats, outboards, karts, motorcycles, and recreational aircraft. 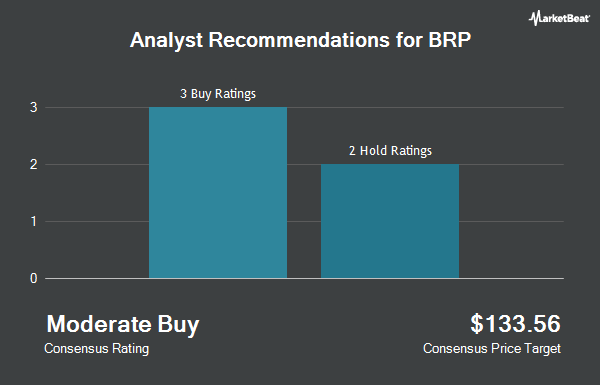 Receive News & Ratings for BRP Daily - Enter your email address below to receive a concise daily summary of the latest news and analysts' ratings for BRP and related companies with MarketBeat.com's FREE daily email newsletter.

Complete the form below to receive the latest headlines and analysts' recommendations for BRP with our free daily email newsletter: