Semtech Co. (NASDAQ:SMTC) Given Average Recommendation of “Hold” by Analysts

Shares of Semtech Co. (NASDAQ:SMTC – Get Rating) have been assigned an average recommendation of “Hold” from the thirteen brokerages that are currently covering the stock, MarketBeat reports. Five analysts have rated the stock with a hold recommendation and four have given a buy recommendation to the company. The average twelve-month price target among brokerages that have updated their coverage on the stock in the last year is $62.00.

Semtech (NASDAQ:SMTC – Get Rating) last posted its quarterly earnings data on Wednesday, August 31st. The semiconductor company reported $0.87 earnings per share for the quarter, topping the consensus estimate of $0.85 by $0.02. The company had revenue of $209.25 million for the quarter, compared to analysts’ expectations of $208.29 million. Semtech had a net margin of 19.94% and a return on equity of 21.18%. Semtech’s revenue for the quarter was up 13.1% compared to the same quarter last year. During the same period in the prior year, the business earned $0.51 earnings per share. On average, equities analysts forecast that Semtech will post 2.29 EPS for the current fiscal year. 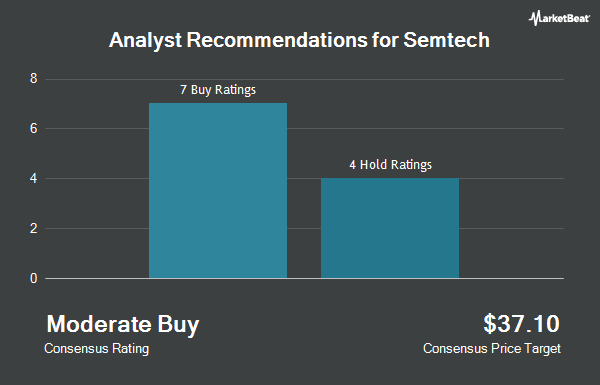