Shares of Devon Energy Co. (NYSE:DVN – Get Rating) have been assigned an average rating of “Moderate Buy” from the twenty-one brokerages that are currently covering the company, MarketBeat Ratings reports. Six research analysts have rated the stock with a hold recommendation, six have assigned a buy recommendation and one has given a strong buy recommendation to the company. The average 1 year price objective among brokerages that have issued ratings on the stock in the last year is $77.59.

Devon Energy (NYSE:DVN – Get Rating) last issued its quarterly earnings data on Monday, August 1st. The energy company reported $2.59 earnings per share for the quarter, beating analysts’ consensus estimates of $2.38 by $0.21. The firm had revenue of $5.63 billion during the quarter, compared to analyst estimates of $4.77 billion. Devon Energy had a return on equity of 48.58% and a net margin of 30.65%. The business’s quarterly revenue was up 132.8% compared to the same quarter last year. During the same quarter last year, the business posted $0.60 earnings per share. Equities research analysts anticipate that Devon Energy will post 9.33 EPS for the current fiscal year.

In other news, EVP Dennis C. Cameron sold 4,537 shares of Devon Energy stock in a transaction that occurred on Tuesday, July 5th. The shares were sold at an average price of $53.55, for a total transaction of $242,956.35. Following the completion of the sale, the executive vice president now owns 270,269 shares of the company’s stock, valued at $14,472,904.95. The transaction was disclosed in a legal filing with the Securities & Exchange Commission, which is accessible through this hyperlink. Insiders own 0.80% of the company’s stock. 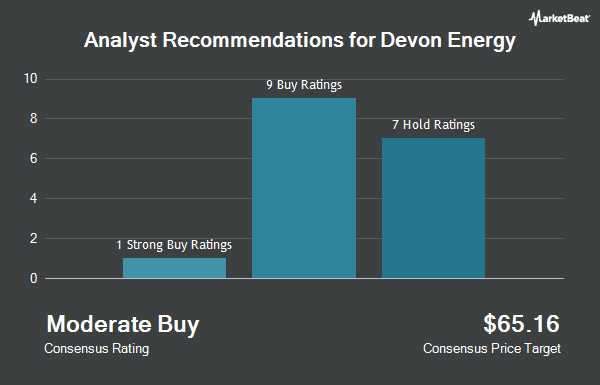