NextEra Energy, Inc. (NYSE:NEE – Get Rating) EVP Ronald R. Reagan sold 9,307 shares of the firm’s stock in a transaction on Wednesday, September 14th. The stock was sold at an average price of $88.79, for a total value of $826,368.53. Following the transaction, the executive vice president now owns 18,176 shares in the company, valued at approximately $1,613,847.04. The transaction was disclosed in a document filed with the SEC, which is available through the SEC website.

NextEra Energy (NYSE:NEE – Get Rating) last released its quarterly earnings data on Friday, July 22nd. The utilities provider reported $0.81 earnings per share for the quarter, beating the consensus estimate of $0.73 by $0.08. NextEra Energy had a return on equity of 11.97% and a net margin of 14.75%. The company had revenue of $5.18 billion for the quarter, compared to the consensus estimate of $5.26 billion. During the same quarter last year, the business posted $0.71 EPS. NextEra Energy’s revenue for the quarter was up 32.0% on a year-over-year basis. As a group, sell-side analysts expect that NextEra Energy, Inc. will post 2.89 EPS for the current fiscal year.

The business also recently announced a quarterly dividend, which was paid on Thursday, September 15th. Shareholders of record on Tuesday, August 30th were issued a dividend of $0.425 per share. This represents a $1.70 annualized dividend and a yield of 2.00%. The ex-dividend date was Monday, August 29th. NextEra Energy’s payout ratio is presently 129.77%. 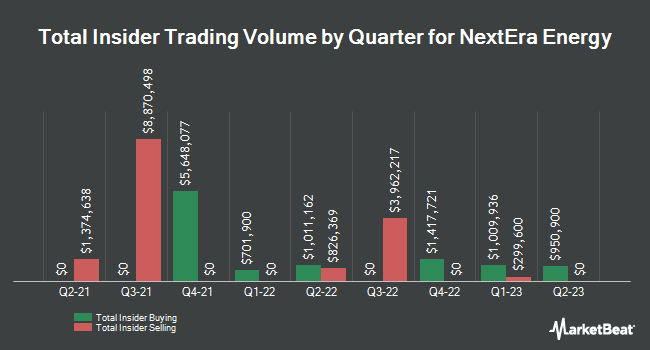 Blackstone Downgraded by StockNews.com to “Sell”

Complete the form below to receive the latest headlines and analysts' recommendations for NextEra Energy with our free daily email newsletter: