Syndax Pharmaceuticals, Inc. (NASDAQ:SNDX – Get Rating) Director Dennis Podlesak sold 11,975 shares of Syndax Pharmaceuticals stock in a transaction dated Friday, September 16th. The stock was sold at an average price of $23.43, for a total value of $280,574.25. Following the completion of the sale, the director now directly owns 75,763 shares in the company, valued at $1,775,127.09. The sale was disclosed in a legal filing with the Securities & Exchange Commission, which is available at this hyperlink.

Several equities research analysts have recently issued reports on the company. B. Riley reaffirmed a “buy” rating and issued a $31.00 target price on shares of Syndax Pharmaceuticals in a report on Thursday, July 28th. The Goldman Sachs Group reduced their price objective on Syndax Pharmaceuticals from $40.00 to $35.00 and set a “buy” rating on the stock in a research note on Tuesday, August 9th. Finally, Robert W. Baird boosted their price objective on Syndax Pharmaceuticals to $32.00 in a research note on Monday, August 15th. One analyst has rated the stock with a sell rating, one has assigned a hold rating and three have assigned a buy rating to the company’s stock. According to MarketBeat.com, the company has a consensus rating of “Hold” and an average price target of $30.00.

Syndax Pharmaceuticals, Inc, a clinical-stage biopharmaceutical company, develops therapies for the treatment of cancer. Its lead product candidates are SNDX-5613, which is in phase 1/2 clinical trial targeting the binding interaction of Menin with the mixed lineage leukemia 1 protein for the treatment of MLL-rearranged (MLLr) and nucleophosmin 1 mutant acute myeloid leukemia (NPM1c AML); and SNDX-6352 or axatilimab, a monoclonal antibody that blocks the colony stimulating factor 1, or CSF-1 receptor for the treatment of patients with chronic graft versus host disease (cGVHD). 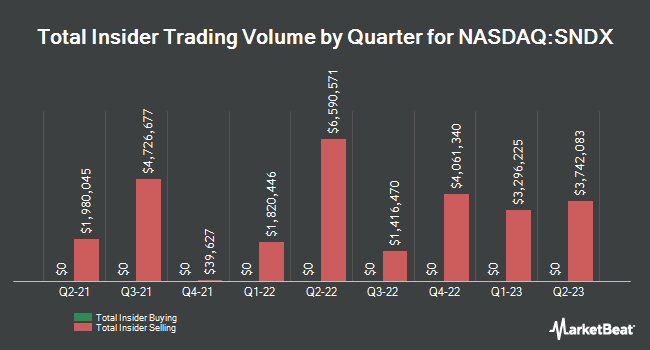 Complete the form below to receive the latest headlines and analysts' recommendations for Syndax Pharmaceuticals with our free daily email newsletter: