Shares of Symbotic Inc. (NASDAQ:SYM – Get Rating) have been assigned an average recommendation of “Moderate Buy” from the eleven analysts that are presently covering the stock, MarketBeat.com reports. One investment analyst has rated the stock with a hold rating and eight have issued a buy rating on the company. The average 12 month target price among brokers that have issued a report on the stock in the last year is $20.60.

In related news, insider Michael David Dunn sold 42,000 shares of the company’s stock in a transaction that occurred on Friday, August 19th. The stock was sold at an average price of $14.49, for a total value of $608,580.00. Following the sale, the insider now directly owns 234,400 shares in the company, valued at $3,396,456. The sale was disclosed in a document filed with the Securities & Exchange Commission, which is accessible through this hyperlink. Insiders have sold 98,334 shares of company stock worth $1,352,282 over the last ninety days.

Symbotic (NASDAQ:SYM – Get Rating) last posted its quarterly earnings results on Monday, August 1st. The company reported ($0.01) EPS for the quarter, beating analysts’ consensus estimates of ($0.03) by $0.02. The company had revenue of $175.55 million during the quarter, compared to analyst estimates of $119.88 million. On average, sell-side analysts predict that Symbotic will post -0.22 earnings per share for the current fiscal year.

Symbotic Inc, an automation technology company, provides robotics and technology to improve efficiency for retailers and wholesalers in the United States. It offers The Symbotic System, a full-service warehouse automation system that reduces costs, improves efficiency, and maximizes inventory. The company is based in Wilmington, Massachusetts. 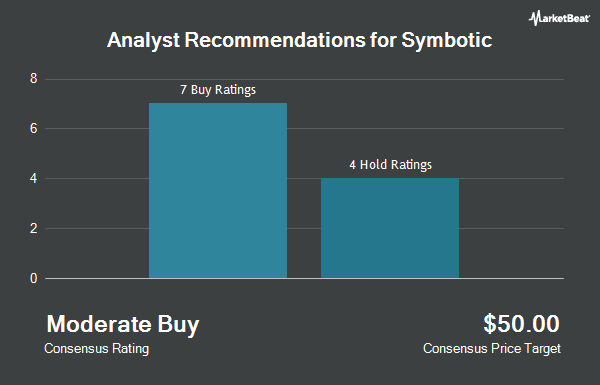 Receive News & Ratings for Symbotic Daily - Enter your email address below to receive a concise daily summary of the latest news and analysts' ratings for Symbotic and related companies with MarketBeat.com's FREE daily email newsletter.

Complete the form below to receive the latest headlines and analysts' recommendations for Symbotic with our free daily email newsletter: