American Trust purchased a new position in HF Sinclair Co. (NYSE:DINO – Get Rating) during the 1st quarter, according to its most recent 13F filing with the SEC. The firm purchased 6,690 shares of the company’s stock, valued at approximately $267,000.

HF Sinclair (NYSE:DINO – Get Rating) last released its earnings results on Monday, August 8th. The company reported $5.59 earnings per share (EPS) for the quarter, beating analysts’ consensus estimates of $4.56 by $1.03. The business had revenue of $11.16 billion for the quarter, compared to the consensus estimate of $9.23 billion. HF Sinclair had a return on equity of 20.74% and a net margin of 5.61%. HF Sinclair’s quarterly revenue was up 143.9% on a year-over-year basis. During the same quarter in the previous year, the business earned $0.87 earnings per share. As a group, equities analysts predict that HF Sinclair Co. will post 13.67 earnings per share for the current fiscal year.

The firm also recently declared a quarterly dividend, which was paid on Thursday, September 1st. Shareholders of record on Thursday, August 18th were given a dividend of $0.40 per share. This represents a $1.60 dividend on an annualized basis and a yield of 3.23%. The ex-dividend date was Wednesday, August 17th. HF Sinclair’s dividend payout ratio (DPR) is presently 20.51%. 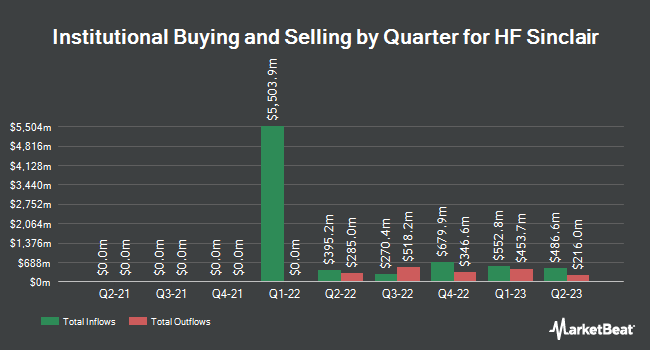