Cheniere Energy, Inc. (NYSEAMERICAN:LNG – Get Rating) has been given an average recommendation of “Buy” by the eleven analysts that are covering the company, MarketBeat reports. Five analysts have rated the stock with a buy rating and one has assigned a strong buy rating to the company. The average 12-month price objective among brokerages that have issued a report on the stock in the last year is $175.10.

In other news, SVP Aaron D. Stephenson sold 3,000 shares of the company’s stock in a transaction on Tuesday, August 23rd. The shares were sold at an average price of $168.21, for a total value of $504,630.00. Following the transaction, the senior vice president now directly owns 56,016 shares of the company’s stock, valued at $9,422,451.36. The transaction was disclosed in a document filed with the Securities & Exchange Commission, which is available at this hyperlink. 0.66% of the stock is currently owned by company insiders.

Cheniere Energy (NYSEAMERICAN:LNG – Get Rating) last released its earnings results on Thursday, August 4th. The energy company reported $2.90 earnings per share for the quarter, topping analysts’ consensus estimates of $2.83 by $0.07. Cheniere Energy had a positive return on equity of 30.72% and a negative net margin of 14.77%. The firm had revenue of $8.01 billion during the quarter, compared to the consensus estimate of $6.42 billion. During the same period in the prior year, the firm posted ($1.30) earnings per share. The firm’s revenue for the quarter was up 165.4% compared to the same quarter last year. Sell-side analysts anticipate that Cheniere Energy will post 10.91 EPS for the current year.

The business also recently declared a quarterly dividend, which was paid on Tuesday, August 16th. Stockholders of record on Tuesday, August 9th were paid a $0.33 dividend. This represents a $1.32 dividend on an annualized basis and a dividend yield of 0.79%. The ex-dividend date of this dividend was Monday, August 8th. Cheniere Energy’s dividend payout ratio (DPR) is presently -14.27%. 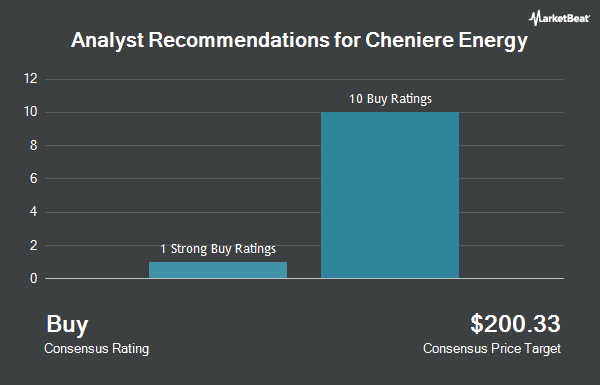 Complete the form below to receive the latest headlines and analysts' recommendations for Cheniere Energy with our free daily email newsletter: