Enbridge (TSE:ENB – Get Rating) (NYSE:ENB) had its price objective cut by BMO Capital Markets from C$63.00 to C$60.00 in a research report released on Tuesday morning, BayStreet.CA reports.

Enbridge (TSE:ENB – Get Rating) (NYSE:ENB) last announced its quarterly earnings data on Friday, July 29th. The company reported C$0.67 earnings per share for the quarter, missing analysts’ consensus estimates of C$0.72 by C($0.05). The company had revenue of C$13.22 billion for the quarter. On average, sell-side analysts anticipate that Enbridge will post 3.0794471 EPS for the current year.

The firm also recently announced a quarterly dividend, which was paid on Thursday, September 1st. Investors of record on Monday, August 15th were paid a dividend of $0.86 per share. This represents a $3.44 annualized dividend and a yield of 6.33%. The ex-dividend date of this dividend was Friday, August 12th. Enbridge’s dividend payout ratio is presently 140.66%. 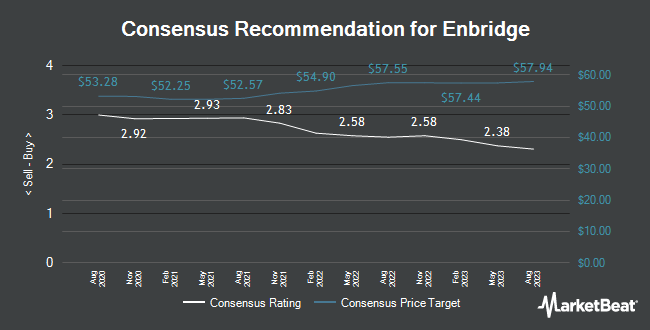