Valero Energy (NYSE:VLO – Get Rating) had its price objective decreased by Cowen to $127.00 in a research note published on Tuesday, Stock Target Advisor reports.

Valero Energy (NYSE:VLO – Get Rating) last announced its quarterly earnings results on Thursday, July 28th. The oil and gas company reported $11.36 earnings per share (EPS) for the quarter, topping analysts’ consensus estimates of $6.33 by $5.03. Valero Energy had a net margin of 4.54% and a return on equity of 34.65%. The firm had revenue of $51.64 billion for the quarter, compared to the consensus estimate of $40.73 billion. During the same period in the prior year, the firm posted $0.48 earnings per share. The company’s revenue for the quarter was up 86.1% on a year-over-year basis. As a group, equities research analysts predict that Valero Energy will post 27.5 EPS for the current fiscal year.

The firm also recently announced a quarterly dividend, which was paid on Thursday, September 1st. Stockholders of record on Thursday, August 4th were paid a dividend of $0.98 per share. The ex-dividend date of this dividend was Wednesday, August 3rd. This represents a $3.92 annualized dividend and a dividend yield of 3.65%. Valero Energy’s dividend payout ratio is presently 22.57%. 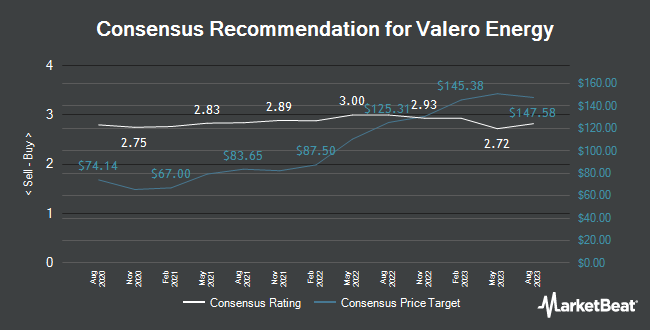 Complete the form below to receive the latest headlines and analysts' recommendations for Valero Energy with our free daily email newsletter: