Evercore ISI initiated coverage on shares of Ziff Davis (NASDAQ:ZD – Get Rating) in a report issued on Tuesday morning, MarketBeat.com reports. The brokerage issued an outperform rating and a $90.00 target price on the technology company’s stock.

Ziff Davis (NASDAQ:ZD – Get Rating) last released its quarterly earnings data on Tuesday, August 9th. The technology company reported $1.58 EPS for the quarter, topping analysts’ consensus estimates of $1.39 by $0.19. Ziff Davis had a net margin of 25.22% and a return on equity of 18.69%. The company had revenue of $337.30 million during the quarter, compared to the consensus estimate of $348.66 million. During the same period last year, the firm earned $2.36 EPS. The firm’s revenue for the quarter was down 1.2% compared to the same quarter last year. Analysts expect that Ziff Davis will post 6.16 EPS for the current year.

In related news, Director Sarah Ann Fay acquired 1,162 shares of Ziff Davis stock in a transaction dated Tuesday, August 16th. The stock was bought at an average price of $86.49 per share, with a total value of $100,501.38. Following the transaction, the director now directly owns 11,070 shares in the company, valued at approximately $957,444.30. The purchase was disclosed in a filing with the SEC, which is accessible through this link. Insiders own 4.50% of the company’s stock.

Ziff Davis, Inc, together with its subsidiaries, provides internet information and services in the United States, Canada, Ireland, and internationally. It operates in two segments, Digital Media, and Cybersecurity and Martech. The Digital Media segment operates a portfolio of web properties and apps, which include IGN, RetailMeNot, Mashable, PCMag, Humble Bundle, Speedtest, Offers, Black Friday, MedPageToday, Everyday Health, BabyCenter, and What to Expect, among others in the technology, shopping, entertainment, and health and wellness markets. 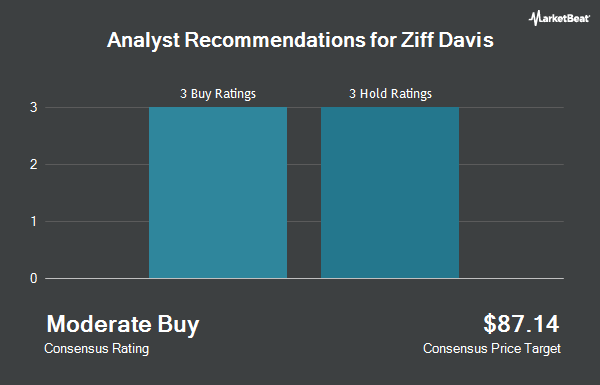 Complete the form below to receive the latest headlines and analysts' recommendations for Ziff Davis with our free daily email newsletter: