Shares of Criteo S.A. (NASDAQ:CRTO – Get Rating) have received an average recommendation of “Moderate Buy” from the nine research firms that are presently covering the company, MarketBeat Ratings reports. Three investment analysts have rated the stock with a hold recommendation and five have assigned a buy recommendation to the company. The average 1 year price target among brokers that have updated their coverage on the stock in the last year is $40.00.

Criteo (NASDAQ:CRTO – Get Rating) last announced its quarterly earnings data on Wednesday, August 3rd. The information services provider reported $0.42 earnings per share for the quarter, topping the consensus estimate of $0.28 by $0.14. The company had revenue of $215.00 million during the quarter, compared to analyst estimates of $219.24 million. Criteo had a net margin of 6.22% and a return on equity of 14.19%. The firm’s revenue for the quarter was down 2.3% compared to the same quarter last year. During the same period last year, the business earned $0.46 EPS. On average, sell-side analysts expect that Criteo will post 2.38 EPS for the current year.

Criteo SA, a technology company, provides marketing and monetization services on the open Internet in North and South America, Europe, the Middle East, and Africa, and the Asia-Pacific. The company's Criteo Shopper Graph, which derives clients' proprietary commerce data, such as transaction activity on their digital properties. 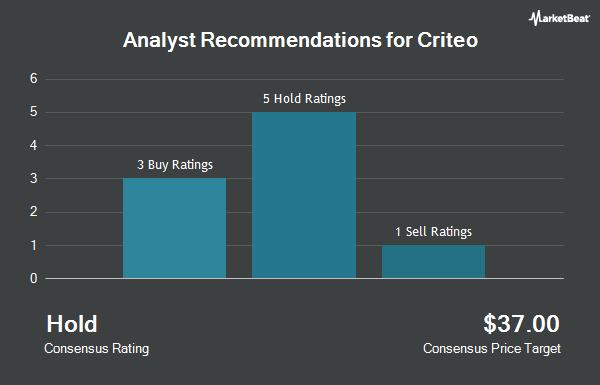 Receive News & Ratings for Criteo Daily - Enter your email address below to receive a concise daily summary of the latest news and analysts' ratings for Criteo and related companies with MarketBeat.com's FREE daily email newsletter.

Complete the form below to receive the latest headlines and analysts' recommendations for Criteo with our free daily email newsletter: