MKM Partners reiterated their buy rating on shares of Matador Resources (NYSE:MTDR – Get Rating) in a research note issued to investors on Wednesday morning, The Fly reports. MKM Partners currently has a $68.00 price target on the energy company’s stock.

Other research analysts have also issued reports about the company. StockNews.com lowered Matador Resources from a buy rating to a hold rating in a report on Tuesday, May 24th. KeyCorp started coverage on Matador Resources in a report on Monday. They set an overweight rating and a $72.00 target price on the stock. Two investment analysts have rated the stock with a hold rating and eight have issued a buy rating to the stock. According to MarketBeat, Matador Resources has an average rating of Moderate Buy and an average target price of $63.78.

Matador Resources (NYSE:MTDR – Get Rating) last posted its quarterly earnings results on Tuesday, July 26th. The energy company reported $3.47 earnings per share (EPS) for the quarter, topping the consensus estimate of $3.16 by $0.31. Matador Resources had a return on equity of 43.58% and a net margin of 40.86%. The business had revenue of $943.93 million for the quarter, compared to analyst estimates of $829.21 million. During the same period last year, the company earned $1.02 EPS. Equities research analysts expect that Matador Resources will post 11.05 earnings per share for the current year.

The company also recently announced a quarterly dividend, which was paid on Thursday, September 1st. Stockholders of record on Wednesday, August 17th were given a $0.10 dividend. This is an increase from Matador Resources’s previous quarterly dividend of $0.05. The ex-dividend date of this dividend was Tuesday, August 16th. This represents a $0.40 annualized dividend and a dividend yield of 0.74%. Matador Resources’s dividend payout ratio is presently 4.59%. 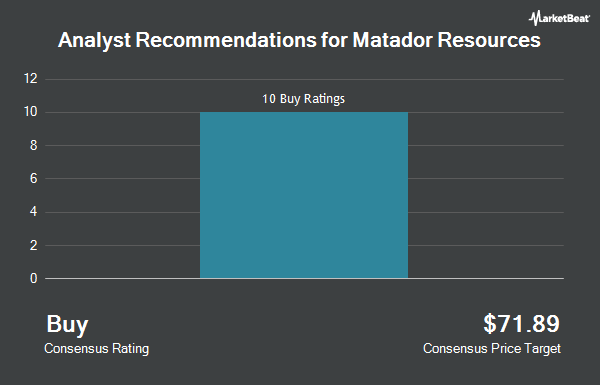