Sutro Biopharma (NASDAQ:STRO – Get Rating) had its price objective cut by HC Wainwright from $30.00 to $20.00 in a report released on Wednesday, The Fly reports. The firm presently has a “buy” rating on the stock. HC Wainwright’s target price suggests a potential upside of 171.37% from the company’s previous close.

Several other research analysts have also issued reports on the stock. Wells Fargo & Company reissued an “overweight” rating and issued a $15.00 price target on shares of Sutro Biopharma in a research report on Thursday, August 18th. Truist Financial cut their target price on Sutro Biopharma from $37.00 to $21.00 and set a “buy” rating for the company in a research report on Tuesday, August 23rd. Six research analysts have rated the stock with a buy rating, According to MarketBeat.com, the stock has a consensus rating of “Buy” and an average price target of $20.29.

Sutro Biopharma (NASDAQ:STRO – Get Rating) last announced its quarterly earnings results on Monday, August 8th. The company reported ($0.55) earnings per share (EPS) for the quarter, beating the consensus estimate of ($0.74) by $0.19. The firm had revenue of $28.10 million for the quarter, compared to analyst estimates of $13.64 million. Sutro Biopharma had a negative net margin of 252.33% and a negative return on equity of 55.57%. Sell-side analysts predict that Sutro Biopharma will post -2.35 earnings per share for the current year.

Sutro Biopharma, Inc operates as clinical stage drug discovery, development, and manufacturing company. It focuses on creating protein therapeutics for cancer and autoimmune disorders through integrated cell-free protein synthesis and site-specific conjugation platform, XpressCF+.The company's product candidates include STRO-001, an antibody-drug conjugate (ADC) directed against the cancer target CD74 for patients with multiple myeloma and non-Hodgkin lymphoma that is in Phase 1 clinical trials; and STRO-002, an ADC directed against folate receptor-alpha for patients with ovarian and endometrial cancers, which is in Phase 1 clinical trials. 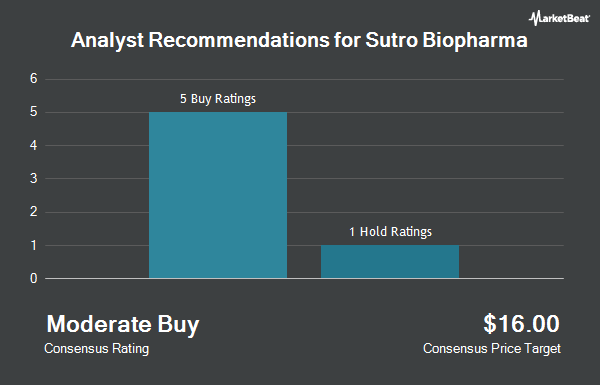 Complete the form below to receive the latest headlines and analysts' recommendations for Sutro Biopharma with our free daily email newsletter: