United Airlines Holdings, Inc. (NASDAQ:UAL – Get Rating) has been given a consensus recommendation of “Hold” by the twenty-one ratings firms that are covering the company, Marketbeat Ratings reports. Three investment analysts have rated the stock with a sell rating, eight have assigned a hold rating and seven have assigned a buy rating to the company. The average 1 year price target among brokers that have issued ratings on the stock in the last year is $52.47.

In other United Airlines news, EVP Gregory L. Hart sold 30,000 shares of the firm’s stock in a transaction that occurred on Thursday, October 20th. The shares were sold at an average price of $39.54, for a total transaction of $1,186,200.00. Following the sale, the executive vice president now owns 25,258 shares of the company’s stock, valued at $998,701.32. The transaction was disclosed in a filing with the SEC, which can be accessed through the SEC website. 0.37% of the stock is owned by corporate insiders.

United Airlines (NASDAQ:UAL – Get Rating) last announced its earnings results on Wednesday, October 19th. The transportation company reported $2.81 earnings per share for the quarter, topping the consensus estimate of $2.15 by $0.66. The company had revenue of $12.88 billion during the quarter, compared to analyst estimates of $12.74 billion. United Airlines had a negative net margin of 1.85% and a negative return on equity of 11.42%. United Airlines’s revenue was up 66.2% compared to the same quarter last year. During the same quarter last year, the firm posted ($1.02) earnings per share. On average, analysts predict that United Airlines will post 1.59 EPS for the current year. 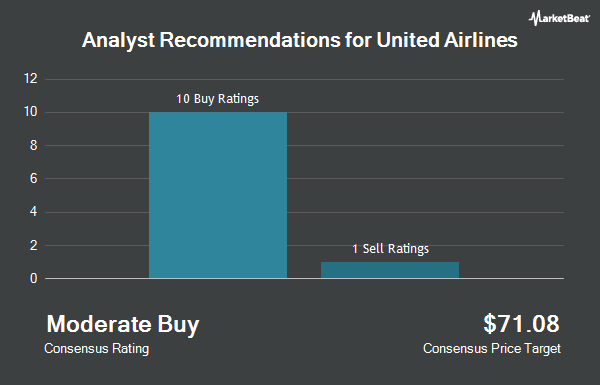