Lowe’s Companies (NYSE:LOW – Get Rating) is scheduled to issue its quarterly earnings data before the market opens on Wednesday, November 16th. Analysts expect the company to announce earnings of $3.10 per share for the quarter. Lowe’s Companies has set its FY23 guidance at $13.10-13.60 EPS and its FY 2022 guidance at $13.10-$13.60 EPS.Parties that are interested in registering for the company’s conference call can do so using this link.

Lowe’s Companies (NYSE:LOW – Get Rating) last issued its earnings results on Wednesday, August 17th. The home improvement retailer reported $4.67 earnings per share (EPS) for the quarter, topping analysts’ consensus estimates of $4.63 by $0.04. Lowe’s Companies had a negative return on equity of 155.26% and a net margin of 8.83%. The business had revenue of $27.48 billion during the quarter, compared to analysts’ expectations of $28.16 billion. During the same quarter in the prior year, the firm earned $4.25 EPS. The business’s revenue for the quarter was down .3% compared to the same quarter last year. On average, analysts expect Lowe’s Companies to post $14 EPS for the current fiscal year and $14 EPS for the next fiscal year.

The firm also recently announced a quarterly dividend, which will be paid on Wednesday, February 8th. Shareholders of record on Wednesday, January 25th will be issued a dividend of $1.05 per share. This represents a $4.20 dividend on an annualized basis and a yield of 2.01%. Lowe’s Companies’s payout ratio is 33.10%.

In related news, EVP Seemantini Godbole sold 11,761 shares of the business’s stock in a transaction that occurred on Friday, August 19th. The stock was sold at an average price of $214.37, for a total value of $2,521,205.57. Following the completion of the sale, the executive vice president now owns 26,575 shares in the company, valued at approximately $5,696,882.75. The transaction was disclosed in a filing with the Securities & Exchange Commission, which is accessible through this link. 0.24% of the stock is owned by insiders. 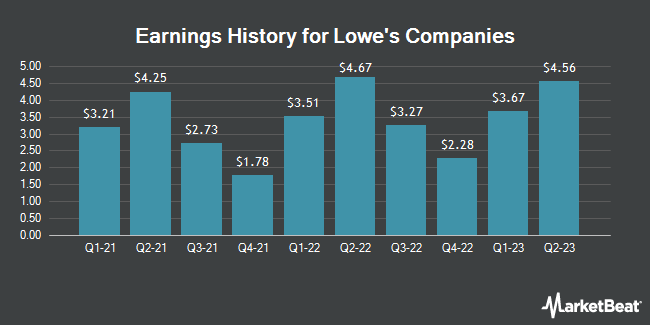