Xponential Fitness (NYSE:XPOF – Get Rating) had its price target lifted by Piper Sandler from $34.00 to $36.00 in a report released on Friday, The Fly reports. Piper Sandler currently has an overweight rating on the stock.

Several other analysts also recently weighed in on XPOF. Raymond James lifted their target price on shares of Xponential Fitness from $27.00 to $29.00 and gave the company a strong-buy rating in a report on Friday, August 12th. B. Riley assumed coverage on shares of Xponential Fitness in a report on Thursday, September 15th. They issued a buy rating and a $29.00 target price on the stock. Five investment analysts have rated the stock with a buy rating and one has given a strong buy rating to the company’s stock. According to MarketBeat, the company currently has an average rating of Buy and an average target price of $30.43.

In related news, EVP Megan Moen sold 10,000 shares of the business’s stock in a transaction dated Tuesday, October 4th. The shares were sold at an average price of $20.09, for a total transaction of $200,900.00. Following the sale, the executive vice president now owns 59,159 shares of the company’s stock, valued at $1,188,504.31. The transaction was disclosed in a legal filing with the SEC, which can be accessed through this link. 69.33% of the stock is owned by insiders. 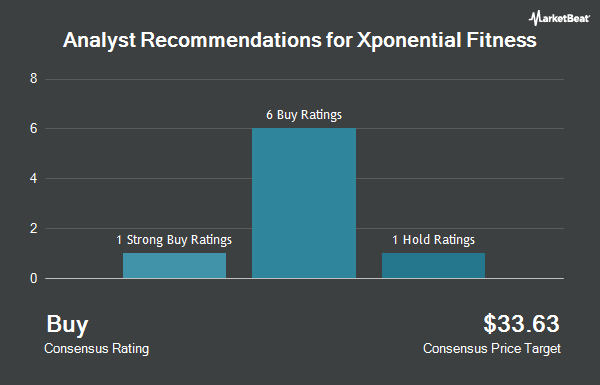 Complete the form below to receive the latest headlines and analysts' recommendations for Xponential Fitness with our free daily email newsletter: