Drax Group (LON:DRX – Get Rating) had its target price reduced by Royal Bank of Canada from GBX 1,175 ($13.81) to GBX 950 ($11.16) in a research report released on Tuesday morning, MarketBeat.com reports. They currently have an outperform rating on the stock.

Other research analysts also recently issued reports about the company. Citigroup reiterated a sell rating and issued a GBX 616 ($7.24) price target on shares of Drax Group in a report on Friday, August 12th. Barclays cut their price target on Drax Group from GBX 1,170 ($13.75) to GBX 820 ($9.64) and set an overweight rating for the company in a report on Monday, October 31st. One investment analyst has rated the stock with a sell rating and five have given a buy rating to the company. According to MarketBeat, the company currently has a consensus rating of Moderate Buy and an average target price of GBX 740.17 ($8.70).

Drax Group plc, together with its subsidiaries, engages in renewable power generation in the United Kingdom. The company operates through three segments: Generation, Customers, and Pellet Production. The Generation segment provides renewable, dispatchable power, and system support services to the electricity grid. 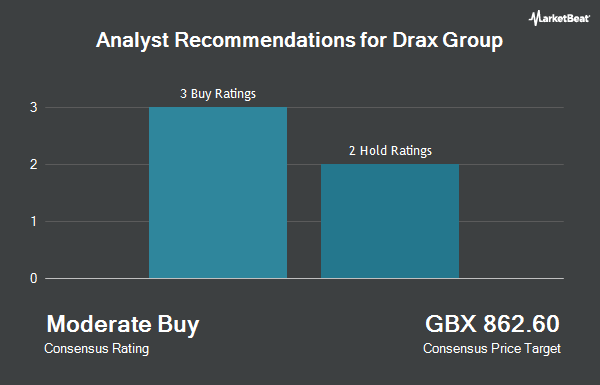 Complete the form below to receive the latest headlines and analysts' recommendations for Drax Group with our free daily email newsletter: