Prospera Financial Services Inc grew its holdings in Intrepid Potash, Inc. (NYSE:IPI – Get Rating) by 1,143.2% in the second quarter, according to its most recent disclosure with the SEC. The fund owned 1,554 shares of the basic materials company’s stock after buying an additional 1,429 shares during the period. Prospera Financial Services Inc’s holdings in Intrepid Potash were worth $70,000 at the end of the most recent reporting period.

Several research analysts recently issued reports on IPI shares. BMO Capital Markets cut their price target on shares of Intrepid Potash from $45.00 to $40.00 and set a “market perform” rating for the company in a report on Friday, November 4th. StockNews.com initiated coverage on shares of Intrepid Potash in a report on Wednesday, October 12th. They issued a “hold” rating for the company.

Intrepid Potash, Inc, together with its subsidiaries, engages in the extraction and production of the potash in the United States and internationally. It operates through three segments: Potash, Trio, and Oilfield Solutions. The Potash segment offers muriate of potash or potassium chloride for use as a fertilizer input in the agricultural market; as a component in drilling and fracturing fluids for oil and gas wells, as well as an input to other industrial processes in the industrial market; and as a nutrient supplement in the animal feed market.

Want to see what other hedge funds are holding IPI? Visit HoldingsChannel.com to get the latest 13F filings and insider trades for Intrepid Potash, Inc. (NYSE:IPI – Get Rating). 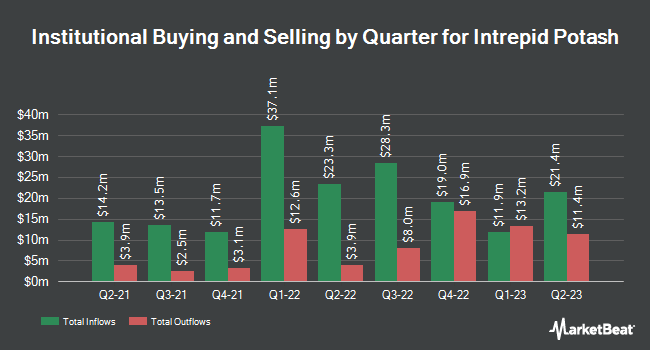 Complete the form below to receive the latest headlines and analysts' recommendations for Intrepid Potash with our free daily email newsletter: