ADTRAN (NASDAQ:ADTN – Get Rating) was downgraded by StockNews.com from a “hold” rating to a “sell” rating in a report issued on Wednesday.

ADTN has been the topic of a number of other research reports. The Goldman Sachs Group lifted their price target on shares of ADTRAN from $21.00 to $24.00 and gave the company a “neutral” rating in a research note on Monday, August 8th. Loop Capital upgraded ADTRAN from a “hold” rating to a “buy” rating and increased their target price for the stock from $21.00 to $26.00 in a report on Monday, September 26th. Westpark Capital began coverage on ADTRAN in a research note on Tuesday, September 13th. They issued a “hold” rating on the stock. Rosenblatt Securities reduced their price objective on ADTRAN from $30.00 to $29.00 and set a “buy” rating for the company in a research report on Thursday, September 8th. Finally, Cowen lifted their target price on ADTRAN to $34.00 in a research report on Monday, August 15th. One investment analyst has rated the stock with a sell rating, two have given a hold rating and four have issued a buy rating to the company. Based on data from MarketBeat.com, the stock has a consensus rating of “Hold” and a consensus price target of $29.33.

In other ADTRAN news, CEO Brian Protiva sold 26,501 shares of the business’s stock in a transaction that occurred on Tuesday, August 23rd. The stock was sold at an average price of $24.64, for a total transaction of $652,984.64. Following the transaction, the chief executive officer now owns 330,609 shares of the company’s stock, valued at approximately $8,146,205.76. The transaction was disclosed in a legal filing with the Securities & Exchange Commission, which can be accessed through the SEC website. Insiders own 2.08% of the company’s stock. 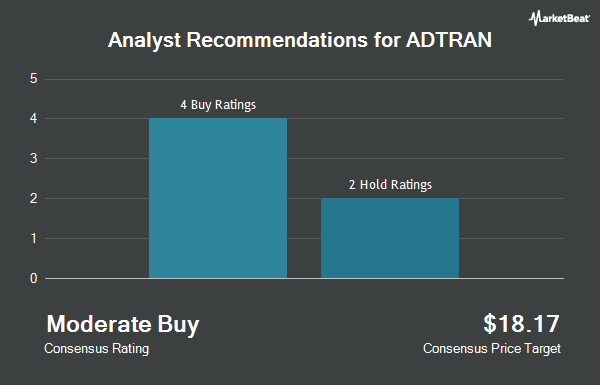 Receive News & Ratings for ADTRAN Daily - Enter your email address below to receive a concise daily summary of the latest news and analysts' ratings for ADTRAN and related companies with MarketBeat.com's FREE daily email newsletter.

Complete the form below to receive the latest headlines and analysts' recommendations for ADTRAN with our free daily email newsletter: