ThredUp (NASDAQ:TDUP – Get Rating) had its price target cut by Piper Sandler from $3.50 to $2.00 in a report released on Tuesday, The Fly reports. They currently have a neutral rating on the stock.

ThredUp (NASDAQ:TDUP – Get Rating) last issued its quarterly earnings data on Monday, August 15th. The company reported ($0.29) EPS for the quarter, missing analysts’ consensus estimates of ($0.23) by ($0.06). The company had revenue of $76.42 million for the quarter, compared to analyst estimates of $76.04 million. ThredUp had a negative return on equity of 41.55% and a negative net margin of 28.65%. The company’s revenue for the quarter was up 27.5% compared to the same quarter last year. During the same quarter in the prior year, the firm earned ($0.15) EPS. On average, research analysts anticipate that ThredUp will post -0.89 earnings per share for the current fiscal year.

ThredUp Inc, together with its subsidiaries, operates online resale platforms that allows consumers to buy and sell secondhand women's and kids' apparel, shoes, and accessories. ThredUp Inc was incorporated in 2009 and is headquartered in Oakland, California. 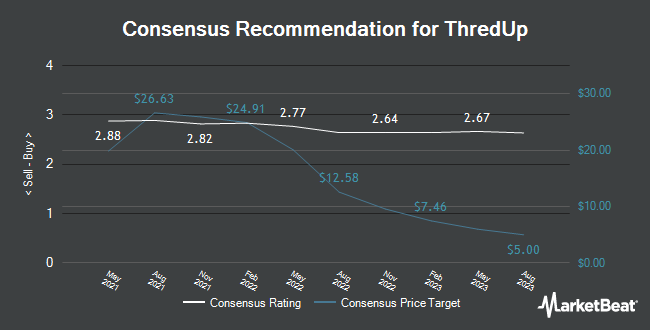 Receive News & Ratings for ThredUp Daily - Enter your email address below to receive a concise daily summary of the latest news and analysts' ratings for ThredUp and related companies with MarketBeat.com's FREE daily email newsletter.

Complete the form below to receive the latest headlines and analysts' recommendations for ThredUp with our free daily email newsletter: