The firm also recently announced a semi-annual dividend, which was paid on Monday, November 14th. Investors of record on Tuesday, November 1st were paid a $1.3398 dividend. The ex-dividend date was Monday, October 31st. This represents a dividend yield of 4.4%. Coca-Cola FEMSA’s payout ratio is presently 60.39%.

A number of research firms recently commented on KOF. Barclays increased their target price on Coca-Cola FEMSA from $65.00 to $72.00 and gave the company an “overweight” rating in a research note on Wednesday, October 26th. StockNews.com began coverage on Coca-Cola FEMSA in a research report on Wednesday, October 12th. They issued a “strong-buy” rating for the company. Three analysts have rated the stock with a hold rating, two have assigned a buy rating and one has issued a strong buy rating to the company’s stock. Based on data from MarketBeat.com, Coca-Cola FEMSA has a consensus rating of “Moderate Buy” and an average price target of $63.00.

Want to see what other hedge funds are holding KOF? Visit HoldingsChannel.com to get the latest 13F filings and insider trades for Coca-Cola FEMSA, S.A.B. de C.V. (NYSE:KOF – Get Rating). 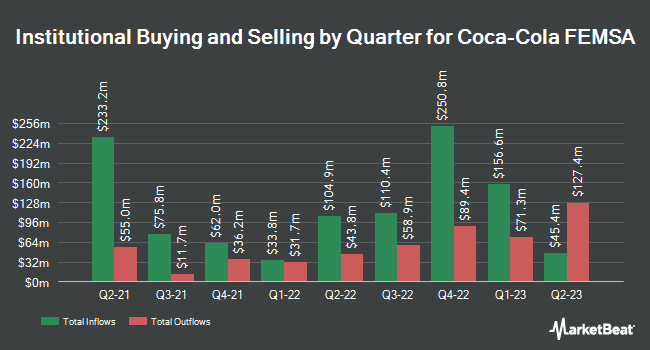