Lazard Asset Management LLC raised its stake in shares of City Holding (NASDAQ:CHCO – Get Rating) by 3,692.9% in the 2nd quarter, according to the company in its most recent filing with the Securities & Exchange Commission. The fund owned 13,427 shares of the bank’s stock after purchasing an additional 13,073 shares during the period. Lazard Asset Management LLC owned 0.09% of City worth $1,072,000 at the end of the most recent quarter.

City (NASDAQ:CHCO – Get Rating) last issued its earnings results on Tuesday, October 18th. The bank reported $1.83 EPS for the quarter, beating analysts’ consensus estimates of $1.70 by $0.13. City had a return on equity of 15.41% and a net margin of 38.33%. The business had revenue of $67.35 million during the quarter, compared to analyst estimates of $63.70 million. On average, sell-side analysts expect that City Holding will post 6.64 EPS for the current year.

The company also recently announced a quarterly dividend, which was paid on Monday, October 31st. Investors of record on Friday, October 14th were given a $0.65 dividend. This represents a $2.60 dividend on an annualized basis and a yield of 2.65%. This is a positive change from City’s previous quarterly dividend of $0.60. The ex-dividend date was Thursday, October 13th. City’s payout ratio is presently 41.34%. 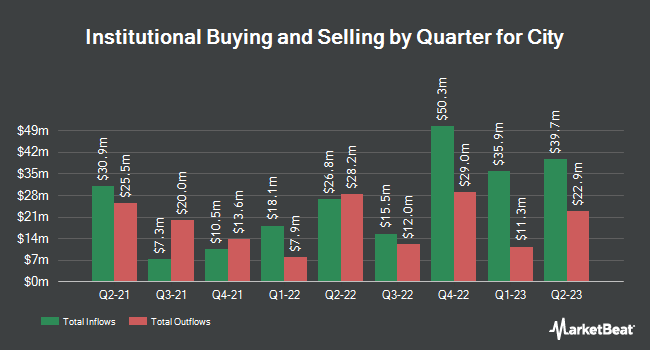