Walleye Trading LLC purchased a new position in shares of Kezar Life Sciences, Inc. (NASDAQ:KZR – Get Rating) in the second quarter, according to the company in its most recent Form 13F filing with the Securities and Exchange Commission (SEC). The firm purchased 38,490 shares of the company’s stock, valued at approximately $318,000. Walleye Trading LLC owned approximately 0.06% of Kezar Life Sciences at the end of the most recent quarter.

Separately, HC Wainwright increased their target price on shares of Kezar Life Sciences from $20.00 to $21.00 and gave the stock a “buy” rating in a report on Friday, August 12th.

In related news, major shareholder Morningside Venture Investment sold 28,700 shares of the company’s stock in a transaction on Monday, October 3rd. The stock was sold at an average price of $8.78, for a total transaction of $251,986.00. Following the completion of the transaction, the insider now directly owns 6,080,352 shares in the company, valued at approximately $53,385,490.56. The sale was disclosed in a document filed with the SEC, which is available through this link. Company insiders own 7.80% of the company’s stock.

Kezar Life Sciences, Inc, a clinical-stage biotechnology company, engages in the discovery and development of novel small molecule therapeutics to treat unmet needs in immune-mediated diseases and cancer in the United States. The company's lead product candidate is KZR-616, a selective immunoproteasome inhibitor that is in Phase 2 clinical trials for various indications, including lupus nephritis, dermatomyositis, and polymyositis; and Phase 1b clinical trials in systemic lupus erythematosus and lupus nephritis. 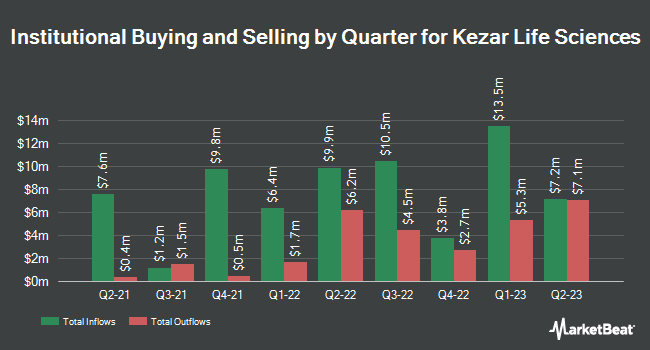 Ultrapar Participações Shares Gap Up to $2.50

Johnson Outdoors Shares Gap Up to $55.21

Complete the form below to receive the latest headlines and analysts' recommendations for Kezar Life Sciences with our free daily email newsletter: