Campbell Soup (NYSE:CPB – Get Rating) was downgraded by stock analysts at StockNews.com from a “buy” rating to a “hold” rating in a research report issued to clients and investors on Saturday.

Campbell Soup (NYSE:CPB – Get Rating) last released its earnings results on Thursday, September 1st. The company reported $0.56 earnings per share for the quarter, meeting analysts’ consensus estimates of $0.56. Campbell Soup had a return on equity of 25.81% and a net margin of 8.84%. The company had revenue of $1.99 billion during the quarter, compared to analyst estimates of $1.98 billion. During the same quarter in the previous year, the company posted $0.55 EPS. Campbell Soup’s revenue for the quarter was up 6.1% on a year-over-year basis. On average, research analysts forecast that Campbell Soup will post 2.9 earnings per share for the current fiscal year.

In other news, EVP Anthony Sanzio sold 3,600 shares of the business’s stock in a transaction on Monday, October 3rd. The shares were sold at an average price of $47.35, for a total transaction of $170,460.00. Following the sale, the executive vice president now directly owns 14,445 shares of the company’s stock, valued at $683,970.75. The sale was disclosed in a filing with the Securities & Exchange Commission, which is available through this link. Corporate insiders own 21.05% of the company’s stock. 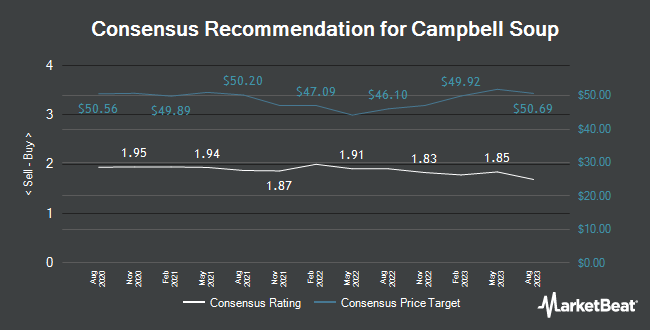 Complete the form below to receive the latest headlines and analysts' recommendations for Campbell Soup with our free daily email newsletter: