State Board of Administration of Florida Retirement System purchased a new position in shares of Alpha Metallurgical Resources, Inc. (NYSE:AMR – Get Rating) during the 2nd quarter, according to the company in its most recent 13F filing with the SEC. The institutional investor purchased 4,920 shares of the energy company’s stock, valued at approximately $635,000.

In other news, CEO David J. Stetson sold 15,000 shares of the firm’s stock in a transaction dated Wednesday, August 24th. The shares were sold at an average price of $166.68, for a total transaction of $2,500,200.00. Following the completion of the transaction, the chief executive officer now directly owns 75,739 shares of the company’s stock, valued at approximately $12,624,176.52. The transaction was disclosed in a legal filing with the Securities & Exchange Commission, which is available through this hyperlink. 5.70% of the stock is owned by insiders.

The firm also recently disclosed a None dividend, which will be paid on Tuesday, January 3rd. Stockholders of record on Thursday, December 15th will be issued a dividend of $5.418 per share. This represents a dividend yield of 14%. This is an increase from Alpha Metallurgical Resources’s previous None dividend of $0.39. The ex-dividend date is Wednesday, December 14th. Alpha Metallurgical Resources’s dividend payout ratio (DPR) is presently 2.01%.

Alpha Metallurgical Resources, Inc, a mining company, produces, processes, and sells met and thermal coal in Virginia and West Virginia. As of December 31, 2021, it operated twenty active mines and eight coal preparation and load-out facilities. The company was formerly known as Contura Energy, Inc and changed its name to Alpha Metallurgical Resources, Inc in February 2021. 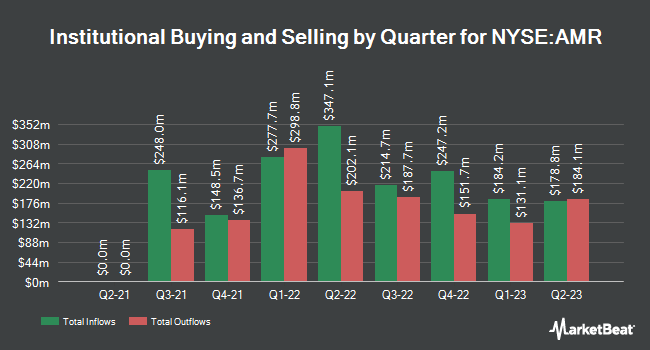 Conn’s Downgraded to “D” at TheStreet

i3 Verticals, Inc. Receives Consensus Rating of “Buy” from Analysts

i3 Verticals, Inc. Receives Consensus Recommendation of “Buy” from Brokerages

Rightmove plc Given Average Recommendation of “Hold” by Analysts

Rightmove plc Given Average Recommendation of “Hold” by Analysts

Complete the form below to receive the latest headlines and analysts' recommendations for Alpha Metallurgical Resources with our free daily email newsletter: